Patrick Joseph Sullivan (born January 18, 1950 in Birmingham; died December 1, 2019) was a quarterback and football coach. He won the 1971 Heisman Trophy as quarterback for the Auburn Tigers, and spent five years in the National Football League. He started his coaching career in 1986 at Auburn and was, for six years the head coach at Texas Christian University before returning to Birmingham to work as offensive coordinator at UAB. He accepted the head coaching job at Samford University on November 30, 2006. He retired following the 2014 season. 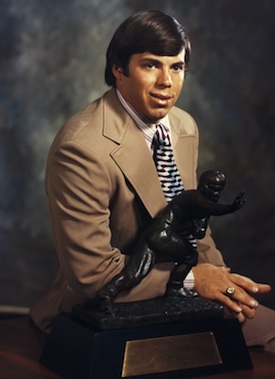 In 2020, UAB launched the Pat and Jean Sullivan Comprehensive Head and Neck Cancer Survivor Care Program to provide patients with a better quality of life during and after treatment for cancer. The program has been designed to provide comprehensive, state-of-the-art survivorship care for head and neck cancer survivors in Alabama, regardless of where they received their primary treatment.