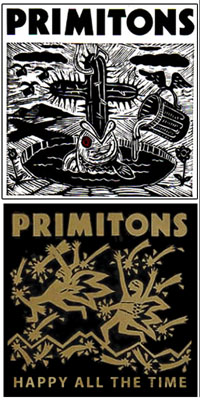 The Primitons was a pop-rock band which was active between 1984 and 1990. The band featured guitarist/vocalist Mots Roden and drummer/accordionist Leif Bondarenko, both former members of Jim Bob & the Leisure Suits. They were joined by guitarist Brad Dorset (replaced by bassist Don Tinsley for the second release), Tim Christner and lyricist Stephanie Truelove Wright.

The Primitons performed at the grand opening of Wuxtry records on 4th Avenue North in October 1985.

Because of their pop-country influences, jangly guitar and Mitch Easter production they were usually lumped in with Big Star, Guadalcanal Diary and R.E.M. in the outburst of Southern guitar pop of the mid 1980s. They found many devoted fans locally and in the music press. Troubles with record labels folding, lackluster production and weak marketing, and the advent of the CD player kept the Primitons from reaching real stardom.

Greg Glover's Arena Rock Records issued a compilation album of the Primitons on compact disc in 2012.