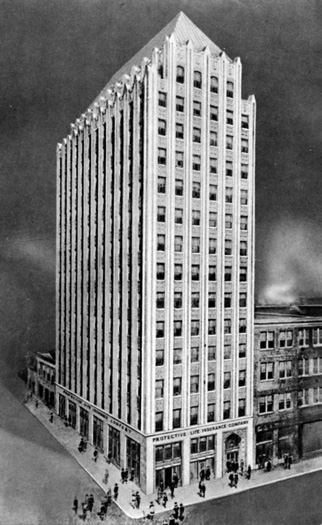 It was constructed for the Protective Life Insurance Company in 1928 on the foundations of the earlier 3-story Birmingham Ledger building, the frame and foundations of which had been designed to carry a much taller structure. The design, by Warren, Knight and Davis, is an elegant, elongated Art Deco-influenced neo-gothic with cream-colored terra-cotta trim and a cornice punctuated by pointed battlements. A steeply-pitched copper hip roof crowns the penthouse with an engaged elevator tower on the west side. The building was constructed by Foster S. Creighton.

The lobby, behind a large pointed arched opening on the west side of the north facade, is clad in pink and beige marble with a dark, vaulted ceiling and a mural, Protective, which depicts a guardian angel sheltering a child.

In addition to Protective Life Insurance, early tenants included Warren, Knight and Davis, which moved their offices to the 7th floor, and radio station WAPI-AM, which took part of the 14th floor and began broadcasting from an antenna mounted over the elevator tower on December 31, 1928. 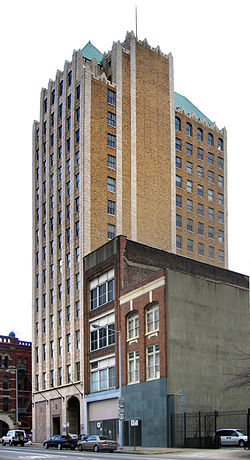 The Protective Life building in 2006

During the 1960s the building was known for its chimes, which played the opening refrain from "Dixie" before striking the hour. A Britling Cafeteria operated in the building in the early 1960s.

Protective life moved out of the building to a new headquarters at Mountain Brook's Office Park in 1976. The building was purchased by the Birmingham Chamber of Commerce and adorned with a large vertical neon "Commerce Center" sign.

The chamber sold the property in 2002 to Atlanta's Inman Park Properties for $1.1 million. The developer relocated most of the tenants from the nearby Brown Marx Building to the Commerce Center in anticipation of redeveloping the larger tower into apartments. That project was later abandoned.

In 2009 the building's tenants were asked to relocate elsewhere. Ownership fell into the hands of the Citizens Trust Bank. In early 2011, LAH Commercial announced the sale of the 71,000-square foot building to an undisclosed buyer. No redevelopment plans were announced. In 2017 the building was sold by Aksut Enterprises to JK Commerce LLC for $2.875 million.

In early 2018 Rhaglan Hospitality, the company headed by Jim Lewis that redeveloped the Redmont Hotel (and which shares an address with JK Commerce), announced that they were seeking funding to transform the building into a 96-room luxury hotel. The project would depend on obtaining a $2.5 million loan from the U.S. Department of Housing and Urban Development to offset property acquisition and pre-construction costs.

Fifth Dimension Architecture prepared the designs for the renovations. Development plans for the 96-room Kelly Hotel were approved by the Birmingham Design Review Committee in July 2018. Representatives indicated that construction could begin that fall, with a projected opening in late 2019. In fact, the start of construction was delayed until January 2020. The hotel opened December 17, 2021.