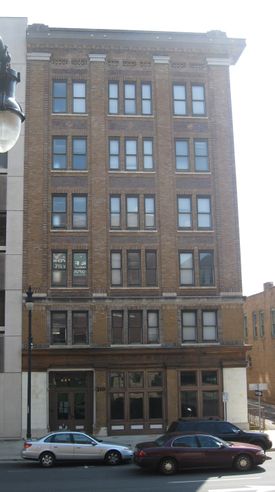 The Pythian Temple of Alabama is a six-story brick office building located at 310 18th Street North in what is now Birmingham's Civil Rights District. The building was constructed in 1913 by the black-owned Windham Construction for the Alabama Penny Savings Bank, which was relocating from their 1890 building a block south.

Some have identified the style of the Pythian Temple with the work of African American architect Wallace Rayfield, who kept an office in the building under both owners for a time. The bank did provide financing for many of the homes that Rayfield designed for Birmingham's black professionals. One of the bank's directors, Arthur Brown, had hired Rayfield to design his own home and he and another physician who practiced from the Pythian Temple, had been among those lobbying for the rebuilding of Thomas School, which was also designed by Rayfield.

When the Penny Savings Bank folded in 1915, the building was purchased by the Grand Lodge of the Knights of Pythias for $70,000. The lodge rechristened the building as the Pythian Temple. In the middle of the 20th century the building was sold to entrepreneur A. G. Gaston. He used it for offices for several subsidiaries to the Booker T. Washington Insurance Company, and had a personal office in the building.

In 1980, the Pythian Temple was added to the National Register of Historic Places.

In August 2012, brothers Howard and Adam McKay purchased the multi-tenant office building, which at the time was about 20 percent leased. While the McKays live in Washington, D.C., they are Birmingham natives, and plan to renovate the building with the goal of preserving its historic character. The offices of the Birmingham History Center relocated to the Pythian Temple building in 2014.