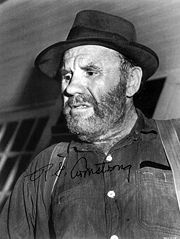 Robert Golden Armstrong (born April 7, 1917 in Pleasant Grove; died July 27, 2012 in Studio City, California) was an actor, best known for his supporting roles in westerns and for his portrayal of Lewis Vandredi in the Friday the 13th television series.

Armstrong grew up in Western Birmingham and graduated from Hueytown High School and enrolled at Howard College to study English. While there he became interested in theater. When he transferred to the University of North Carolina to complete a master's of fine arts he joined the Carolina Playmakers, where he worked with Andy Griffith. From there he went to New York and joined the Actor's Studio. He first appeared on Broadway in the 1953 play End as a Man. He also began writing and producing off-broadway plays and auditioning for film roles. He appeared in his first film, Garden of Eden, in 1954.

In 1955 Armstrong won good reviews for his portrayal of Big Daddy in Cat on a Hot Tin Roof. In the late 1950s he moved to Hollywood and began apprearing in westerns such as "The Rifleman", "Bonanza", "Rawhide", "Gunsmoke", and "Have Gun, Will Travel".

He became a favorite of director Sam Peckinpah, who cast him as a conflicted Bible-toting heavy in films like Ride the High Country, Major Dundee, The Ballad of Cable Hogue, and Pat Garett & Billy the Kid. Armstrong played gym-owner Thor Erickson in the 1976 Bob Rafelson film Stay Hungry, set in Birmingham.