From Bhamwiki
(Redirected from Railroad reservation)
Jump to: navigation, search

Section of an 1880 map showing the Railroad Reservation

The Railroad Reservation is a plot of land, 1000 feet wide by 4,780 feet long in the center of Birmingham's street grid, set aside in William Barker's original plat of the city for use by the railroads and related industries.

Colonel James Powell described the creation of the corridor in his 1st report to stockholders of the Elyton Land Company in January 1872, a few months after the first lots were sold in the new city:

"Deeming it necessary as a preliminary measure to arrange for those railroads companies for the reservation of those grounds needed for their purpose and other roads in process of construction to a common center at Birmingham, I appointed several occasions to meet the representatives of those companies, the we might agree upon the location and extent of the grounds therefor, preparatory to the survey of the property. [...] I immediately organized an engineers party and begun the work of surveying and laying off then then future city. After this work had progressed for about six weeks, in which time about 300 acres had been surveyed and sub-divided into about 1,500 lots, staked off and numbered, the chief engineers of the Alabama and Chattanooga and the South and North Alabama railroads were deputed by their respective companies to make another survey and location of the grounds to be reserved for railroad purposes. Another location was then agreed upon, by the railroad companies and your president, which necessitated a new survey and gave to the two railroad companies and to others soon expected to be built a large strip of the best lands of your company, about one mile long, and one thousand feet wide, being 500 feet on each side of the line of the A and C Railroad, including the 100 feet of right of way of that road, in the center [of] which on either side of the A and C Railroad, are special reservations each 415 feet by 900 feet for general passenger and freight depot for the use of all the railroad companies centering here, a right way 85 feet wide on each side of the A and C Railroad, including the 100 feet right of way of that road, being granted to all the railroads to this center. This grant embraces 105.12 acres and is to be used exclusively for railroad purposes by the first four railroads connecting at this point."

The sites at either end of the reservation, where various other railroads met the existing Alabama and Chattanooga Railroad and turned parallel across the center of the city, were given over to two of the early blast furnaces within Birmingham, the Alice Furnace on the west, and Sloss Furnaces on the east. Gradually, other industries were given plots within the reserved area as well. 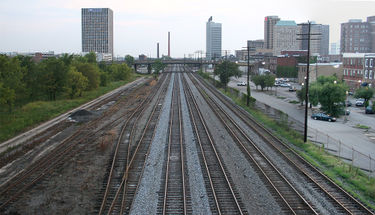 The tracks within the railroad reservation remain active today, giving people in Birmingham a rare opportunity to engage in trainspotting or benching in the midst of the downtown core. 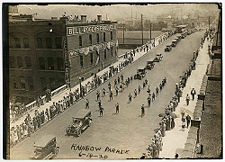 A parade over the newly-completed Rainbow Viaduct in 1920

Crossing the railroad reservation became a challenge as street traffic increased and Birmingham's Southside became increasingly developed. The railroad bed was regraded in 1930 and a series of viaducts and underpasses were constructed over several decades to eliminate grade crossings. The four underpasses were completed in 1931, with reinforced concrete headwalls featuring art-deco designs by architect David O. Whillden.

Currently nine roadways cross above or below the tracks downtown. The following list is ordered from west to east:

A strip of vacant land on the south side of the Railroad Reservation, between 18th and 14th Streets became an open-air storehouse for railroad equipment collected by the Heart of Dixie Railroad Club. The site had long been proposed for an interpretive railroad museum, but by the time the city assembled funding for its popular Railroad Park, which opened in 2010, the club had relocated its collections to Calera.