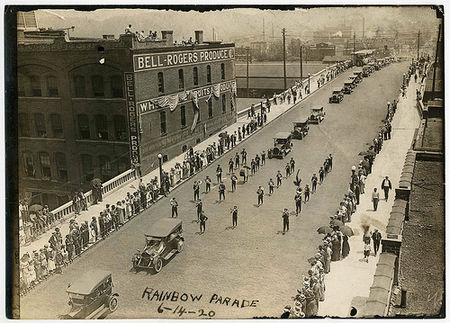 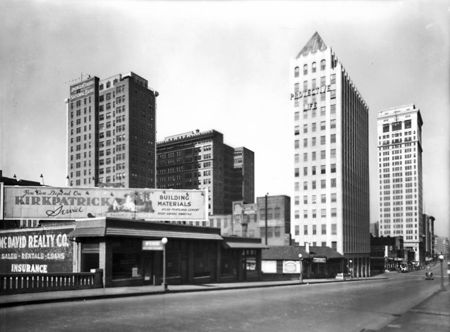 1930 view from the viaduct, looking north 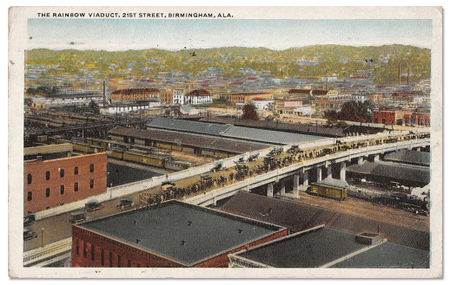 The Rainbow Viaduct (also known as the 21st Street Viaduct) is the vehicular overpass connecting downtown Birmingham with Southside along Richard Arrington, Jr. Boulevard, formerly 21st Street. The bridge carries three lanes of traffic in a one-way direction from south to north over the railroad reservation, Morris Avenue and 1st Avenue South.

Meter parking and pedestrian sidewalks are available along the entire length of the bridge on both the east and west sides. The northern end 1st Avenue North is flanked by the Protective Life building to the west and the Steiner Building to the east.

The viaduct was constructed at a cost of $160,000, eighty percent of which came from the Louisville & Nashville, Alabama Great Southern, Seaboard Air Line, and Southern Railways, while the city paid the other twenty percent. 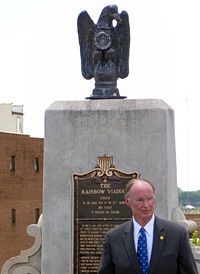 Gov. Robert Bentley after the unveiling of the new eagle statues on Memorial Day, 2012

Constructed in 1918 and formally dedicated on May 19, 1919, the bridge was the first major connection between downtown and Southside completed within the city. The viaduct is dedicated to the decorated veterans of the 167th Infantry Regiment who fought as part of the "Rainbow Division" during World War I. At the apex of the bridge a pair of small memorials, topped with eagles, carry plaques honoring those veterans.

Lighting was installed on the viaduct in 1945 under the city's contract with the Birmingham Electric Company. In 1965 three spans were damaged by a fire on Morris Avenue. Temporary bracing was installed to permit pedestrians and passenger cars to use the viaduct until permanent repairs could be made.

The original concrete eagles deteriorated and were replaced in May 2012 with iron replicas, cast by Lee McKee at Sloss Metal Arts. Funding for the new statuary and for the restoration of the plaques was secured through the efforts of Susan Todt and I Believe in Birmingham, with the help of U.S. Representative Spencer Bachus. A Memorial Day re-dedication ceremony was attended by Bachus, Governor Robert Bentley, Adjutant General Perry Smith. and Mayor William Bell, along with members of the current 167th Theater Sustainment Command as they prepared for re-deployment to Afghanistan in support of Operation Enduring Freedom.

As the bridge surpassed 100 years in service, it was included in listings of "structurally deficient" bridges in need of replacement. A weight limit of 3 tons was established for safety.

In October 2016 the Alabama Department of Transportation (ALDOT) held a public hearing on a proposed replacement of the viaduct, a project which would be headed by the Birmingham Department of Planning, Engineering & Permits. City engineer Fred Hawkins told the Birmingham Business Journal that the design work was being carried out by an independent engineering firm, and that they would "try and restore the historic features" as part of their work. As presented, though, the proposal would include barriers on the sides of the bridge above the railroad tracks.

In early December 2016 Mayor Bell's office announced that it had reached an agreement with ALDOT to restore the existing bridge rather than replace it.

The replacement proposal returned in April 2018. Conceptual designs by Neel-Schaffer engineers and ArchitectureWorks were presented at a public meeting on July 19. The presentation included a bike lane, a wider pedestrian sidewalk on the east side of the span, a landscaped park to incorporate the memorials, and a new stairway access to Morris Avenue.

In 2019, with heavy vehicles continuing to use the bridge despite the posted weight limit, the City of Birmingham added additional warning signs while also communicating with organizations employing heavy vehicles and increasing police patrols. On Friday January 21, 2022 the city closed the bridge to cars and trucks altogether. Pedestrians, cyclists, and scooter users were allowed to continue using the bridge. A new design for a replacement had been commissioned by the city, along with discussion potential sources of funding.

On May 19, 1919, soon after its completion, this 21st Street Viaduct was named the Rainbow Viaduct in tribute to Alabama’s famous 167th Infantry of the Rainbow Division. Renowned for bravery and honor, the 167th was the nation’s only regiment in World War I referred to by its home state – “The Alabama.” Made up of men from throughout Alabama, including a large number from Birmingham, this regiment had to its credit the following brave deeds, among countless others:

The Rainbow Viaduct is dedicated to the memory of the Jefferson County members of the 167th Infantry, Rainbow Division, of whom the following were killed in action or died of wounds in the World War 1914 - 1918: