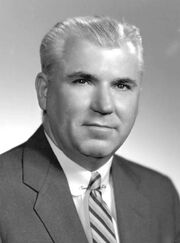 Raymond Weeks (born August 18, 1908 in Columbus, Georgia; died May 6, 1985 in Birmingham) is credited with leading the effort to expand the observance of Armistice Day to honor veterans of all wars, formally recognized as a National Veterans Day holiday by President Dwight Eisenhower on June 1, 1954.

Weeks was born in Georgia, but his family moved to Phenix City and, later, Birmingham, during his childhood. He attended Bush Elementary School and graduated from Ensley High School and Birmingham-Southern College.

In 1942 Weeks enlisted in the U.S. Navy for service in World War II. He was granted his discharge on November 9, 1945. He founded the National Veterans Day Volunteer Organization in Birmingham in 1947 and served as chairman until his death.

Weeks also served three terms in the Alabama State House of Representatives. He was active in many civic and veterans groups including the March of Dimes, the Junior Chamber of Commerce, the Civitan Club of Birmingham, and the American Legion. He was honored with a National Community Service Award, the Veterans of Foreign Wars Award, a Distinguished Service Medal from the Governor of Alabama, and a Presidential Citizenship Medal given to him by President Ronald Reagan in 1982.

A granite Raymond Weeks Memorial was dedicated on the northwest corner of Linn Park on November 11, 2007. Scholarships in his name have been established at Birmingham-Southern, Samford University, and the University of Alabama.