This article is about the mountain ridge, for other uses see Red Mountain (disambiguation). 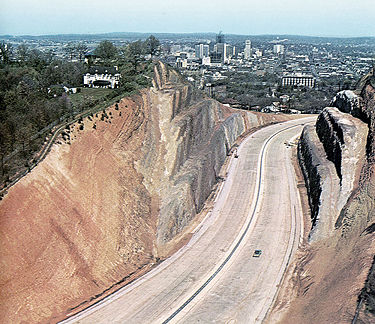 Red Mountain is a long ridge running southwest-northeast and dividing Jones Valley from Shades Valley across southern Jefferson County, south of Birmingham. The formation of hard Silurian rock strata lies exposed in several long crests, several of which have been called "Red Mountain" because of the rust-stained rock faces and prominent seams of red hematite iron ore. In general, the "Red Mountain" ridge extends from the vicinity of Tannehill Historical State Park in the southwest to near Echo Lake near the St Clair County line.

The best displays of the mountain's geological strata occur at the 20th Street South cut near Vulcan and at the U.S. Highway 31 cut leading into the suburb of Homewood. Most of Birmingham's television and radio stations have their studios and/or transmitters located on Red Mountain.

Red Mountain carries multiple seams of hematite iron ore, representing the southern terminus of the Clinton formation which extends as far as New York. In the Birmingham District the formation is nearly unbroken between Ruffner Mountain in the north to a point four miles south of Bessemer. The ore was formed in fossiliferous layers of sandstone and limestone by later seepage of iron dissolved in water. On Red Mountain the formation is mined at three seams. The "Big seam" ranges in thickness from 10 to 22 feet, thinning out north of Grace's Gap. The "Irondale seam", ranging from 4 to 8 feet thick is of better quality. The "Ida Hickory Nut seam", below that, ranges from 2 to 6 feet thick.

At Birmingham the lower 100 feet is predominantly shaly and there is a 20-foot bed of thick-layered sandstone 34 feet above the bottom. Above this shaly part lies the Irondale ore bed, which is separated from the Big seam of iron ore by a few feet of shale and of sandstone layers that carry large and small waterworn pebbles. Next above lies the Big seam, approximately 17 feet thick, above which these is about 38 feet of red sandstone that carries small quartz pebbles, the lower 14 feet of which has yellow shale about equal in amount to sandstone. About 30 feet still higher is the "Pentamerus"-bearing bed (Hickory Nut seam), a ferruginous sandstone full of casts of the interiors of the big brachiopod "Pentamerus oblongus." There is still about 70 feet more of sandstone, largely reddish, and shale to the top of the Red Mountain formation, making a total thickness in this part of Red Mountain of about 260 feet.

[...]The most interesting and valuable feature of the Red Mountain formation is its iron ore, which is the chief cornerstone of Alabama's industrial structure. Although ore of good quality and of workable thickness occurs elsewhere, as at Attalla and on the Red Mountain along the west side of Murphree's Valley, the main deposit, the Big seam, lies under Shades Valley and the part of the Cahaba coal field southeast of that part of Red Mountain which extends from a point a mile or two southwest of Bessemer to Morrow Gap about 8 miles northeast of Birmingham.

[...]The Red Mountain ores are known as a red fossil ore, because originally the iron accumulated in extensive beds of fragments of fossils, principally the hard parts of crinoids, bryozoans, and brachiopods. The iron, from solution in some form, was precipitated upon and within these beds of fossil fragments and thus the ore beds are simply a particular kind of sedimentary layers inclosed in ordinary sediments, shales and sandstones, composing the bulk of the Red Mountain formation. As the fossil fragments were composed of calcium carbonate, which is the mineral that forms limestone, the iron ore beds at depth, where they are unweathered and where there has been no condition that permitted leaching of the lime content, carry a considerable percentage of lime, so that the ore is self-fluxing. Another type of ore is oolite ore, in which the iron oxide occurs in the form of small lenticular pellets. The precipitation of the iron that forms this ore started around some minute particle like a small grain of sand or fragment of fossil and built up a small lenticular body. The two kinds of ore are more or less mixed or one or the other may predominate in a particular layer of ore. - Geology of Alabama (1926)

The red rocks exposed on the mountain ridge and slopes were used by natives as a source of dye, for cloth and face paint. The earliest settlers were aware of the value of the rock, but generally lacked the means to mine, transport or refine it into iron. They did adopt the practice of using it to dye fabric, though. Mention of Alabama's mineral district was first published in 1832 in malacologist Timothy Conrad's Fossil Shells of the Tertiary Formations of North Alabama. University of Alabama professor R. T. Brumby made the first systematic report for the Alabama State Almanac of 1839, which was published by Frederick Barnard in Philadelphia, Pennsylvania. English geologist Sir Charles Lyell added his impressions to the published record in 1846 in his Travels in the United States, remarking on the unlikely confluence of coal, iron ore, corn and cotton and predicting a bright future for the region based on its wealth of natural resources.

State geologist Michael Tuomey undertook the first in-depth mineral survey of the region in 1848. His reports were published in 1850 and 1858, and were utilized by a generation of forge and furnace builders who moved into the district to help supply the Confederacy with iron during the Civil War. Those early efforts were systematically dismantled by Union troops in a campaign known as Wilson's Raid in the Spring of 1865.

The project of developing and promoting the Birmingham District as an industrial area only gained footing after the war. The mountain developed a symbolic place as the source of wealth in the region and was even portrayed as a character in pageants sponsored by the steel companies in their company towns. It slopes served as the site for large estates and upper-class developments which offered cool breezes and a panoramic view of the growing industrial city from above the constant layer of thick black smoke.

As the steel furnaces modernized, it became more economical to purchase pelletized ore from distant sources than to continue mining ore from Red Mountain.

In 1938 the giant cast-iron statue of Vulcan which represented Birmingham in the 1904 World's Fair was put on display atop a sandstone tower built by the Works Progress Administration.

Red Mountain served as a natural promontory for Birmingham's radio and television stations, and a setting for noteworthy nightspots The Club and Baby Doe's Matchless Mine.

In the late 1960s the Red Mountain cut was dug through Red Mountain for a new expressway. Along with opening up easy car access to the Over the mountain suburbs, the cut exposed a striking geological panorama rich with fossil finds. The Red Mountain Museum was established in 1971 adjacent to the east side of the cut on Arlington Road. Along with general science exhibits and displays of Alabama fossils, the museum created an interpretive self-guided tour along one of the embankments of the cut.