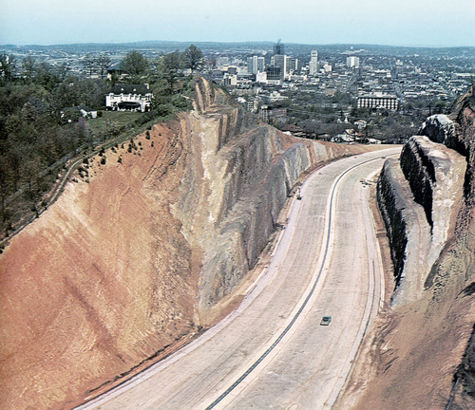 The Red Mountain cut just prior to opening in 1970

The Red Mountain cut is a 210-foot-deep, 1,640-foot-long highway cut created through Red Mountain for the Red Mountain expressway, an extension of Highway 31 and Highway 280 into downtown Birmingham.

The project represented the latest in a series of proposals to create a Red Mountain Tunnel through the ridge to connect Birmingham to Homewood and other new residential areas to the South. The recommendation to use a road cut rather than a tunnel was made by Harland Bartholomew and other consultants in their 1960 report to the Birmingham Downtown Improvement Association and the Jefferson County Commission. The cities of Birmingham, Homewood, Mountain Brook and Vestavia Hills subsidized the study along with the County Commission and Alabama State Highway Department. 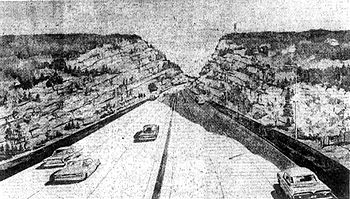 1960 rendering of the proposed cut

The expressway was planned as a six-lane limited-access highway to accommodate anticipated traffic demand for 1980 (29,400 cars and 990 heavy trucks per day). The engineers evaluated a total of 23 possible routes across the mountain, which they narrowed down to six preferred candidates, three in tunnels and three exposed as cuts. All the evaluated options used 26th Street South as the starting point. The route finally selected ("Cut Route D") was the one projected to involve the least cost in purchasing right-of-way and executing construction work. The planners also considered the route's "s-curve" to have aesthetic appeal.

Digging and grading took 7 years, from 1962 to 1969, and the cut was opened to traffic in 1970. The removal of 2 million cubic yards of the ridge of Red Mountain exposed over 190 million years of geologic strata dating to over 500 million years ago. The Ordovician, Silurian, Devonian and Mississippian geologic periods are visible in the cut. Special features include caves, volcanic ash layers, the Red Mountain fault line, prehistoric reefs and beaches, fossils and fossil tracks. Significantly, the cut reveals the cross-section of the red ore seam that spurred Birmingham's development and a layer containing fossils of a unique Silurian trilobite species.

A group of geologists associated with UAB visited the newly-exposed rock strata during the late stages of construction, measuring geologic layers. When informed that the surface was due to be sealed with a layer of concrete in a matter of days, one of the scientists resorted to lying down in front of the concrete truck to stall their progress. An emergency appeal to Governor George Wallace led to a reversal of plans to cover the cut face.

A new city-owned science museum, The Red Mountain Museum, was opened on the slope adjacent to the cut in February 1978. The impetus for the museum grew out of the protests of geologists from the Geological Survey of Alabama, Birmingham-Southern College, and the Alabama Geological Society, who, with the support of the Linn-Henley Charitable Trust, convinced the Highway department to stop spraying concrete over the exposed rock strata. Museum-sponsored paleontologists recovered a large collection of fossils which now form the core of a valuable collection of Alabama fossils held by the McWane Science Center. Interpretive signage was installed along one of the eastern terraces of the cut and guardrails and fencing installed to allow museum visitors to inspect the exposed rock close-up. It is one of only three such "interpretive cuts" in the United States. The others are along Interstate 70 near Denver, Colorado and Interstate 68 in western Maryland. 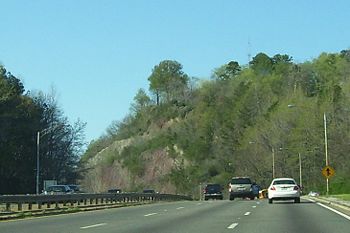 The Red Mountain cut from the south in 2007

In 1991, the Red Mountain Museum partnered with a nearby children's science museum, The Discovery Place, to form "Discovery 2000". Together they moved to downtown Birmingham in 1998 and became the McWane Science Center.

In 1987 the Red Mountain Expressway Cut was granted National Natural Landmark status by the National Park Service. Deemed unsafe because of the potential for rockslides, the interpretive trail has since been closed to the public.

In 2006 McWane president Tim Ritchie and staff paleontologist James Lamb discussed the possibility of selling the former Red Mountain Museum property, but keeping a public access to the walkway, which could be renovated and reopened. In 2007 the City of Birmingham reached an agreement with the Dominican Sisters of St Cecilia Congregation to purchase the former Red Mountain Museum for $606,632 for use as parking for its Saint Rose Academy. The city retained the small neighborhood park adjacent to the museum, and the locked access to the Red Mountain cut walkway. Proceeds from the sale were directed to the McWane Science Center.

In 2022 the Alabama Department of Transportation removed vegetation from the sides of the cut to slow weathering and reduce the risk of falling rocks. A "Red Mountain Cut Foundation" was organized to support restoration of the interpretive path.