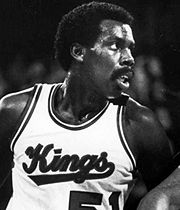 King played at Jackson-Olin High School and played college basketball at the University of Alabama, where he was named the Southeastern Conference's Player of the Year in 1978 and 1979.

King was selected 18th overall by the Kansas City Kings in the 1979 NBA Draft. He spent four seasons with the Kings, and his final 2 years with the Seattle SuperSonics. His best season was in 1980-81 as a member of the Kings when he averaged a career high 14.9 points, 9.7 rebounds and shot a career-best 54.4% field goal percentage.