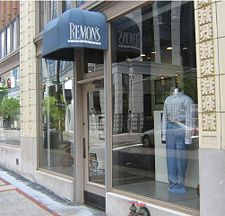 Remon's Clothier is a high-end clothing store at the Summit and is owned by Remon Danforah.

Danforah's original shop was opened in the 1970s at 290 21st Street North in the Massey Building.

In December 2008, Remon's was named in the indictment against Larry Langford, charging that Langford's bills to Remon's were paid by Bill Blount and Al LaPierre in exchange for bond swaps and other deals. During the October 2009 trial, Danforah was accused of double-billing Blount and LaPierre for clothes Langford allegedly had either already paid for or had never bought. Danforah denied those claims.

In September 2009 Remon's opened a second location in the Summit shopping center. When Gus Mayer moved to the Summit in early 2011, eliminating its men's department, the two stores coordinated to allow four of Mayer's employees to transfer to Remon's Summit location. Danforah closed the downtown shop in April 2011.