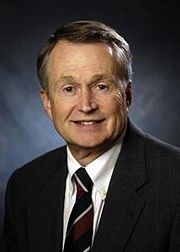 Richard B. "Dick" Marchase (born 1948) was the acting President of the University of Alabama in Birmingham from August 2012 to January 2013. He had formerly served as UAB's Vice President of Research and Economic Development.

Marchase received his bachelor's degree in engineering physics from Cornell University in Ithaca, New York and his doctorate in biophysics from Johns Hopkins University in Baltimore, Maryland. He completed his post-doctoral training at Duke University in Durham, North Carolina and joined the faculty there as an assistant professor. He received a "Presidential Young Investigator Award" from the National Science Foundation in 1984.

Marchase joined UAB in 1986 as Associate Professor of Cell Biology and Anatomy. He was named Professor of Cell Biology in 1990. Later that year, he became Chair of that department, a position he held until 2000 when he was named Associate Dean for Biomedical Research for the School of Medicine. In 2004 he was named acting Vice President for Research, and was appointed to the position permanently in February 2005. In 2007, Marchase's responsibilities expanded to include business development for the university research enterprise.

Marchase is a past Associate Editor of The Anatomical Record and was on the editorial board of the American Journal of Physiology:Cell. He is currently on the Editorial Board of the journal SHOCK. He was presented with the Mary Jane Kugle Award from the Juvenile Diabetes Research Foundation in 1999. Marchase has served as president of the Federation of American Societies for Experimental Biology (FASEB).

In 2006, he married Gail Andrews, director of the Birmingham Museum of Art. He has two children from a previous marriage.