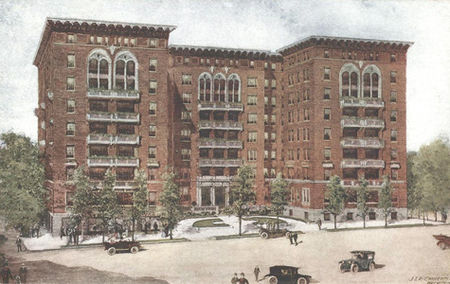 1913 rendering of the Ridgely Apartments

The Ridgely Apartments was a 9-story luxury apartment building at 2021 Park Place near Linn Park. The project was developed in 1913 by Robert Jemison Jr and Edward M. Tutwiler. The brick structure with limestone and terra-cotta details was designed by Tennessee-born J. E. R. Carpenter, who left the firm of McKim, Meade & White in 1909. He was assisted locally by William Leslie Welton.

The steel-framed building was constructed by the Wells Brothers Co. of New York.

The apartments were renovated in 1985-86 as the "new" Tutwiler Hotel, assuming the mantle of the landmark Tutwiler Hotel on 20th Street North that was demolished in 1974.