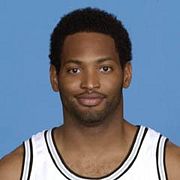 Robert Keith Horry (born August 25, 1970 in Harford County, Maryland) is a retired professional basketball player. He played 16 seasons in the National Basketball Association on seven championship teams. He is one of two NBA players to have played for three different championship clubs. Although usually valued for his defensive skills, his clutch shooting, especially in the playoffs, earned him the nickname "Big Shot Bob".

Born in Maryland, Horry grew up in Andalusia, Covington County. As a senior at Andalusia High School, he won the Naismith Alabama High School Player of the Year award. He considered scholarship offers from Georgia Tech, Wake Forest, and Auburn before choosing Alabama. His mother advised him that she wouldn't be able to attend games any further away.

At Alabama, Horry played for Coach Wimp Sanderson and was a teammate Latrell Sprewell, who also went on to star in the NBA. Horry started 108 of the 133 games he played in and helped the Tide win three Southeastern Conference tournament titles and two berths in the NCAA's Sweet 16 round. Alabama compiled a 98-36 record during his four seasons, with Horry establishing a school record for career blocked shots with 286. He was selected to the All-SEC Defensive and Academic teams.

Horry was selected 11th overall in the 1992 NBA Draft by the Houston Rockets and played as a small forward. He was offered in a trade to the Detroit Pistons before the 1994 season, but it was not completed. He went on to help the Rockets win NBA Championships in 1994 and 1995. He set NBA finals records with seven steals in a game and five 3-pointers in a quarter. His game-winning jump shot in the final seconds of the first game of the 1995 conference finals against the Spurs was the first of numerous clutch shots that decided games in the playoffs.

On August 19, 1996 Horry was traded with three other Rockets to the Phoenix Suns for Charles Barkley. An on-the-court altercation with Suns coach Danny Ainge led to a suspension, after which Horry was sent to the Los Angeles Lakers in a trade for Cedric Ceballos. He played for three Lakers championship teams (2000, 2001 and 2002), hitting game-clinching 3-pointers in at least one game of four-straight playoff series. His shot to win game 4 of the 2002 Western Conference finals rescued the team from elimination. The Lakers went on to sweep the New Jersey Nets in the finals.

Horry struggled in the 2003 playoffs, going 0 for 18 behind the three-point arc and seeing a potential game-winning shot at the end of game 5 of the semifinals rattle out of the basket. He became a free-agent at the end of that season and signed with the San Antonio Spurs. He played fewer minutes in San Antonio, but thrived in Coach Gregg Popovich's system. He helped the team reach the 2005 NBA finals and then, in game 5, scored 21 points in the fourth quarter and overtime, including another game-winning three, to seal a 96-95 victory over the Pistons.

In the 2007 playoffs, Suns forward Raja Bell charged Horry in retaliation for Horry's hip-check of Steve Nash. Horry was ejected from the game and suspended from the series, but the Spurs went on to sweep the Cleveland Cavaliers to win the title, Horry's seventh ring. Another flagrant foul against David West of the New Orleans Hornets prompted some critics to label him "Cheap Shot Rob". Horry became a free agent again after the 2008 season, in which he suffered continual knee ailments, but did not sign a contract and retired from the game. He currently works as a basketball commentator for ESPN.

Horry is one of only nine players with seven or more championship rings, and the only one not to have played for the Boston Celtics' 1960s dynasty. He and John Salley are the only players to have won rings with three different teams. He is the NBA's all-time leader in the number of playoff games played. He holds the record for 3-pointers in the NBA finals and ranks second behind Reggie Miller for 3-point shots made in the playoffs. His 7 threes without a miss in a playoff game against Utah is also a record.

In 2010 Horry was inducted into the Alabama Sports Hall of Fame.