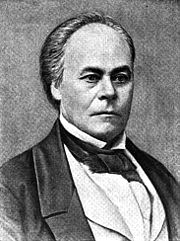 Robert Jemison Jr (born September 17, 1802 in Lincoln County, Georgia; died October 16, 1871 in Tuscaloosa) was a member of the Alabama General Assembly from 1837 to 1863. Though he had voted against secession in the 1861 Secession Convention, he was elected to succeed William Lowndes Yancey in the Confederate Senate and served from 1863 to the end of the war in 1865.

Jemison was the son of William Jemison and a former Miss Mimms (of the family that gave Fort Mims in Baldwin County its name). He used the "Jr" after his name to distinguish himself from an uncle. He grew up in Griggs County, Georgia and attended a school run by N. S. S. Beamon along with Dixon Lewis and other prominent future leaders. He then entered the University of Georgia, but did not graduate. He read law under Stephen W. Harris and Eli Shorter of Eatonton, Georgia before moving to Alabama in the company of his parents in 1821. At Greensboro he continued his studies under Judge Henry Webb and, in 1826, moved to Pickens County where he managed the Garden Plantation.

Jemison moved to Tuscaloosa, where he had already invested heavily in new businesses, in the mid 1830s. He developed several postal routes and stage coaches, competing successfully against rival investors. His business empire grew to encompass toll roads and bridges, a grist mill, a sawmill, livery stables, the Indian Queen Hotel and six plantations totaling over 10,000 acres. He resided at the largest of them, Cherokee Place, in what is now Northport, until constructing a town house.

Jemison's bridge contracts took his as far afield as Georgia and Mississippi, and he employed a slave carpenter, Horace King, to design and construct them. When King purchased his freedom in 1846, Jemison helped him secure an exemption from the manumission laws through an act of the legislature, allowing him to remain in the state

Jemison was first elected to the Alabama State Assembly in 1839 and to the State Senate in 1846. His approach to statesmanship was expressed in an 1849 speech in which he debated John Barr in favor of a taxation bill which was to come before the assembly. Barr had stated that while he generally supported the bill himself, that if elected he would be compelled to represent the people's objections and vote against it. Jemison replied that "his arm should fall paralyzed to his side, that his tongue should cleave to the roof of his mouth, before he would attempt to ride into office upon their errors; that the duty of a statesman was to lead and not follow popular sentiment; that if he found public opinion taking the wrong direction it was his duty to throw himself into the breach and turn it in the right way."

Jemison was one of the leaders who built support for the Alabama State Hospital for the Insane, which was constructed in Tuscaloosa in 1859.

In the Secession Convention in 1861, Jemison was the leader of the group which opposed the majority, whose leaders was William Lowndes Yancey. His primary accomplishment during the session was to explain the undesirability of making traitors of those who resisted secession, as Yancey had threatened. In the end, he did put his signature to the secession act which had been passed by the convention.

Jemison was elected to the Confederate Senate in Richmond in 1863 and served until the war's end. From 1863 to 1869 he was president of the Northeast & Southwest Railroad which crossed the state from Chattanooga, Tennessee.

Jemison died at home in October 1871. He was survived by his wife, Priscilla, and by his daughter, the wife of A. C. Hargrove.