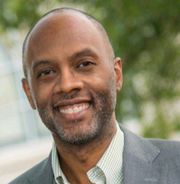 Robert "Bobby" Kennedy Jr (born c. 1970 in Prichard, Mobile County) is a former Naval officer, a marketing professional and a candidate in the 2017 U.S. Senate special election to fill the seat vacated by Jeff Sessions' nomination as Attorney General.

Kennedy grew up in Prichard, graduating from John S. Shaw High School. He attended the U.S. Naval Academy in Annapolis, Maryland, graduating in 1992. He served for nine years as an officer in Asia and the Arabian Gulf. While in the service, he completed a master's in leadership and human resource development at the Naval Postgraduate School. After leaving the Navy, he completed a master's in business administration the Fuqua School of Business at Duke University.

Since leaving the service, Kennedy has worked for Harrah's Entertainment, Toys'R'Us, the Sears Holding Company, and Precision Dermatology.

As a U.S. Senate candidate, Kennedy portrays himself as a fiscal conservative and supporter of gun ownership who supports affordable healthcare, support for public education, and preserving voting rights.