This article is about the hardware dealer. For the Methodist minister, see Robert E. Tyler. 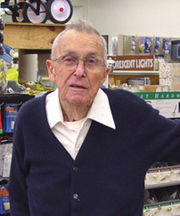 Robert Tyler on his 90th birthday. Photo by Terry Ward

Tyler was one of seven children born to Joe T. Tyler and Florence Foulks Tyler. He grew up in Bluff Park, where his family gave Tyler Road its name. He became a member of Bluff Park United Methodist Church in 1927. In the late 1930's he met and married the former Garnett Cox of Leeds.

Tyler was attending Birmingham-Southern College when the United States became involved in World War II. He served in the U.S. Navy on the USS Shannon, a mine destroyer, from 1942 to 1945. After he returned, he hand-built a home on Park Road in the Bluff Park community in 1948.

In the 1950s, Tyler began working in hardware sales, joining with Huffstutler's Hardware in Homewood eight years later. At his 90th birthday, he was still working there four days a week and was a favorite of customers, some of whom drove long distances to shop at the store. He continued working there until his death.