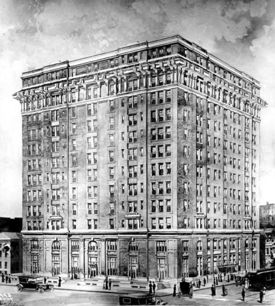 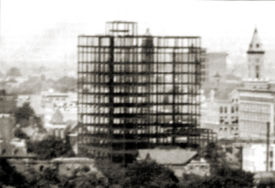 Photograph of the unfinished steel frame

The Roden Hotel was an unfinished high-rise hotel designed by William Weston and located at 1729 5th Avenue North, on the corner of 18th Street. The lot was the former site of Benjamin Roden's mansion, which was demolished in 1913 to make way for the hotel.

The hotel was designed by the New York firm of Starett & van Vleck, with William Weston as the local associate.

Construction of the hotel was contracted to the F. W. Mark Construction Co. on New York on January 30, with F. E. Newberry of St Louis subcontracted for electrical work and the Otis Elevator Company of New York to provide elevator equipment. The Alabama White Marble Company of Sylacauga was contracted to supply stone slabs and the New York Architectural Terra Cotta Company furnished decorative tiles for the facade. Construction began on February 12 and the hotel's steel frame was erected quickly to the total height of twelve stories.

The backers ran out of funds, however, and the building remained a skeleton, jokingly known as "America's best-ventilated hotel." In 1916 architect Eugene Knight prepared a proposal for completing the building as a new City Auditorium with space for city hall functions, including the Birmingham Public Library and Birmingham City Jail on the upper floors. The Birmingham Chamber of Commerce endorsed the proposal, but it was not carried out.

In 1917 the hotel's steel skeleton was dismantled and sold for scrap. The war-time demand for steel allowed the project to net $150,000 for its investors despite never opening for business.

The site was later used for the Hugo L. Black Federal Courthouse.