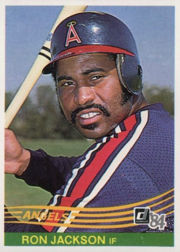 Ron Damien "Papa Jack" Jackson (born May 9, 1953 in Birmingham) is a youth baseball coach and a former infielder in Major League Baseball. He was the hitting coach for the Boston Red Sox in 2004 when they won the World Series for the first time in 86 years.

Jackson, a right-handed player, is the younger brother of minor league outfielder Lawrence Jackson. He graduated from Wenonah High School and was selected by the California Angels in the second round of the 1971 Amateur Draft. He spent that season with the Idaho Falls Angles of the Rookie Pioneer League. In 1972 he moved up to Single-A Quad Cities Angels of the Midwest League. In 1973 he started off with the AA Texas League's El Paso Sun Kings, where he spent two seasons. In 1975 he moved up to the AAA Salt Lake City Gulls of the Pacific Coast League, where he hit for a .281 average with 9 home runs and 85 RBI. He was called up to the California Angels for a September 12, 1975 debut. He returned to Salt Lake City for the start of the 1976 season, but returned to the Angels after 10 games and remained in Anaheim through the 1978 season. In December of that year he was traded to the Minnesota Twins for outfielder Dan Ford. He spent three seasons with the Twins and a brief stint with the Detroit Tigers before he was granted free agent status. He signed with Anaheim in April 1982 and had three more seasons there before being released in August, 1984. He signed with the Baltimore Orioles soon afterward, but was released at the end of the 1984 season, having played in his final Major League game on September 29. He played 62 games for the Louisville Redbirds, St Louis' affiliate in the AAA American Association in 1985. After two seasons away from professional baseball he reported for another 18 games with the Vancouver Canadiens, the White Sox' AAA affiliate in the Pacific Coast League in 1988, filling in several positions including 1 inning of relief pitching, but never returned to the Majors.

Following his retirement as a player, Jackson played for the 1989 Fort Myers Sun Sox of the Senior Professional Baseball Association, hitting .344. He returned to that club in 1990 and batted .179 in 9 games before the league folded. He returned to the White Sox system was a minor league hitting coach for the Vancouver Canadiens and the 1990 Birmingham Barons. In 1991 he was named hitting coordinator for the Milwaukee Brewers' minor league system, coaching for the AAA New Orleans Zephyrs from 1993 to 1995. He returned to the White Sox as a major league hitting coach from 1995 to 1998, then went back to the Brewers in 1999 and the Los Angeles Dodgers' organization in 2000, spending time with the Albuquerque Dukes and Las Vegas 51s.

Jackson was named hitting coach for the Boston Red Sox in 2003. In his first two seasons with Boston, the Red Sox led the majors in runs, batting average, doubles, extra-base hits, total bases, on-base percentage and slugging average. In 2003 the Sox set Major League records for extra-base hits, total bases and slugging, finishing one off the major league lead with 238 home runs. The Red Sox tied the league record with 373 doubles in 2004. At the end of the 2006 season the Red Sox did not renew Jackson's contract. He moved to the Houston Astros organization, coaching for the Round Rock Express from 2007 to 2009.

He currently serves as a guest instructor at the New York Baseball Academy. In 2014 he coached Birmingham's Willie Mays Youth Baseball team to the Junior RBI Championship in Minneapolis.