This article is about the comedian. For others with the same name, see Roy Wood (disambiguation) 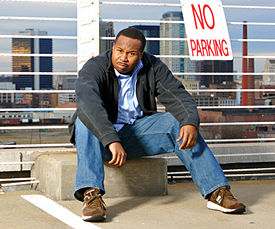 Wood, son of black radio pioneer Roy Wood Sr and much younger half-brother of former WVTM-TV news anchor Roy L. Wood Jr, grew up in West End, attending Central Park Elementary School and Center Street Middle School before he graduated from Ramsay High School in 1996. He was also a member of the A. G. Gaston Boys & Girls Club and attended First Baptist Church of Ensley. He went on to earn a bachelor's degree in broadcast journalism at Florida A&M University in 2001. When visiting home in 1998 he took the stage at the Comedy Club Stardome, and later did spots at the Tide & Tiger, Phoenix Cabaret, and WorkPlay as well.

Wood began his radio career as a morning reporter at Tallahassee's Hot 105.7 FM, while polishing his stand-up material. He took a break from school to open for comedian Tommy Davidson on tour, but returned to complete his degree in 2001. After graduating he moved back to Birmingham and briefly held a job at the Golden Corral in Hoover. He volunteered as an on-air prank caller for the Buck Wilde Morning Show on WBHJ-FM (95.7 JAMZ) in 2001 and earned a paying job as a writer and producer for the program in 2003. He collected his prank calls on CDs which he sold at stand-up performances and at Music-N-More in Birmingham. Many of them became popular on his website, on YouTube.com, on 40 broadcast stations and Jamie Foxx's SIRIUS radio station nationwide.

Wood left WBHJ and moved to Los Angeles in 2006. During Operation Enduring Freedom he sent free compact disc recordings of his prank call sketches to troops stationed overseas. In 2008 he appeared on HBO's Def Comedy Jam and on the Late Show with David Letterman, among other programs.

Wood, who made it to the semi-finals of CBS' "Star Search" in 2003, auditioned for the NBC reality show "Last Comic Standing" in 2002 and 2007 before being accepted in 2010 as one of ten finalists to compete on the program. He finished third.

In September 2010, after Buck Wilde moved to Dallas, Texas, Wood returned to WBHJ-FM as host of his own Roy Wood, Jr Morning Show show, with Nu York and B Money staying on as sidekicks. He was cast in the TBS network situation comedy "Sullivan and Son" in 2012. In September of that year, Wood staged a false controversy to mark his departure from the morning radio program, which continued without him as the Magic City Morning Show. After Sullivan and Son ended in 2014 Wood was hired as a featured correspondent for Comedy Central's The Daily Show with Trevor Noah.