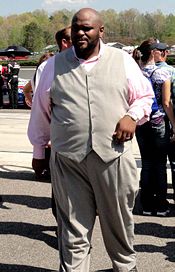 Ruben Studdard at the 2011 Indy Grand Prix of Alabama.

Christopher Ruben Studdard (born September 12, 1978) is a Pop/R&B/Soul/Gospel singer who rose to fame as the winner of the second season of American Idol.

Studdard, the youngest son of two teachers, grew up listening to his mother's Donny Hathaway albums, Fred Hammond, and gospel music. He sang for the first time at the Rising Star Baptist Church in Birmingham at the age of three. He continued singing gospel in church, performing solos as a child while his mother sang in the local choir. While at Huffman High School, he played football and received a scholarship in that sport to Alabama A&M University.

In college, Studdard began to pursue a career in the music industry. He majored in voice studies at Alabama A&M, graduating in 2000 and sang in the Birmingham-based jazz/R&B band Just a Few Cats. One of the backup singers for that band asked Studdard to accompany her to an American Idol audition in Nashville. 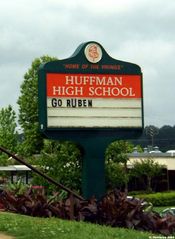 Go Ruben signage at Huffman during his American Idol run.

When auditioning, Studdard sang Stevie Wonder's "Ribbon In The Sky" and he ended up as one of the local finalists. On American Idol, he impressed viewers with his performances of "Superstar" (Carpenters, later covered by Luther Vandross) and the Peabo Bryson/Regina Belle duet "A Whole New World" and the Donna Hathaway song "For All We Know". During the televised competition, Studdard gained the nickname "Velvet Teddy Bear" and was noted for his 205 Flava jerseys representing his hometown area code. with "205", the telephone area code of his hometown of Birmingham. Studdard's Idol performances were praised by music legends such as Lionel Richie, Neil Sedaka, Robin Gibb, Luther Vandross, and Gladys Knight.

He won the contest over runner-up Clay Aiken by just 134,000 votes out of 24,000,000 cast, becoming the second American Idol winner after Kelly Clarkson.

Studdard released his first single album with the hit song "Flying Without Wings" produced by the Underdogs and Face. In December 2003, advance orders for his album Soulful topped the 1 million mark before it was released into stores. The album debuted at number one on the Billboard 200 album chart that month, selling over 400,000 copies in its first week and attaining the highest first-week sales of any American Idol winner. The single "Sorry 2004" from this album reached #9 in the Billboard Hot 100 and #1 on the Billboard R&B singles chart. Studdard received a Grammy Award nomination in December 2003 for best R&B male vocal performance for "Superstar", losing to his idol Luther Vandross. In March 2004, Ruben won the NAACP's "Best New Artist" award.

Studdard then released the gospel album I Need An Angel on November 23, 2004. The title track was a cover of a 2002 single performed by R&B singer Daniel DeBourg and written by R. Kelly. The album, which sold over 96,000 copies in its first week, entered the Gospel charts at #1, and at #20 on the Billboard 200 chart, it since has sold over 500,000 copies. It was also #1 on the 2005 Billboard Year-End Gospel Albums Chart. As of July 2005, Studdard was the fourth-best selling American Idol performer with more than 2 million albums sold in the U.S.

He made frequent guest appearances on television talk shows, televised live performances, and in guest roles on sitcoms such as Eve, All of Us, and 8 Simple Rules for Dating My Teenage Daughter.

In March 2005, Studdard filed a lawsuit against his godfather and business advisor Ronald Edwards. The suit alleges that Edwards ran up $156,000 on Studdard's credit cards and stole $90,000 from his checking account. Edwards filed a countersuit.

In 2007, it was announced that Studdard planned to open a nightclub in the "The Forge", a planned entertainment district near the BJCC. Those plans were not realized.

On June 28, 2008, Studdard married Surata Zuri McCants at Canterbury United Methodist Church in Mountain Brook. They met in October 2006 at a CD signing in Atlanta and he proposed to her at the Venetian Hotel and Casino in Las Vegas, Nevada.

Studdard starred in the 30th anniversary touring rendition of Broadway's Ain't Misbehavin' in 2008. In August of that year, the Internal Revenue Service and Alabama Department of Revenue filed property liens against Studdard, claiming that he owes nearly $200,000 in unpaid income taxes, mostly from 2003.

In November 2011 Studdard filed for divorce. He returned to reality TV in 2013 on NBC's "The Biggest Loser".