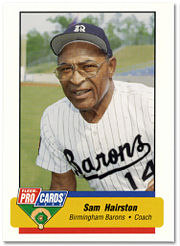 After returning from the service in World War II, the right-handed Hairston began his professional baseball career with the 1944 Birmingham Black Barons, playing infielder and catcher. After that one season he was traded to the Indianapolis Clowns for Pepper Bassett. With the Clowns he became an offensive star, hitting .361 in 1947 and staying above .300 for the next two seasons. He appeared as a pinch hitter in the 1948 East West Classic.

During the winters, Hairston tended bar in Birmingham. He was appreciated by the owners because he didn't, himself, drink. He would bring home wine and champagne corks and pitch them at his sons for batting practice.

In 1950 Harrison's bat made a serious impression. In a 70-game abbreviated season he hit .424 with 17 homers and 71 runs batted in, winning the league's Triple Crown. The next year, he signed a contract to play catcher for the Chicago White Sox, the second Black player signed after Cuban-born Minnie Minoso who came on the same year.

Hairston made his Major League debut on July 21, 1951. For his first appearance he didn't have his own bat, so he just grabbed one out of the dugout. The bat's owner rushed out angrily and grabbed it back. Minoso lent Hairston one of his, which he used to knock a line-drive single. As a bench player he went 2 for 5 in two appearances. Shortly afterwards he hit a coach in the mouth with a line drive during batting practice. The coach retaliated with a tirade of racial insults and promised that Hairston would never play in the majors again.

After dropping back into the minors, Hairston continued his career with the Colorado Springs Sky Sox. He made the Western League's All-Star Team in 1952, 1953, 1955, and 1959. In 1953 he was named Most Valuable Player. In 1955, hitting .350 with 91 runs batted in, he was voted the "Most Popular Player" on his Sky Sox team and presented with a new Pontiac.

Hairston finished his baseball career as a scout and coach in the White Sox organization, beginning in 1961. In 1985 he became a coach on the Birmingham Barons staff.