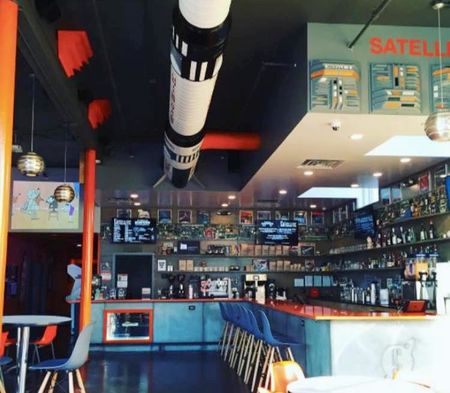 Interior of Satellite bar/coffee shop before the 2018 fire

Saturn is a bar and music venue located in the former Cory & Faulkner Hardware building at 204-208 41st Street South in Avondale. The business, owned by Brian Teasley, opened on May 1, 2015. It is operated under the umbrella of New York City-based booking agency The Bowery Presents, through its Atlanta-based Bowery South subsidiary. Teasley also owns the adjoining coffee shop and bar, Satellite, which functions as a lobby and lounge for the venue. Above the bar is a loft space with bedrooms and a kitchen which is made available to touring groups as a dressing area.

The renovations to the two buildings that formerly housed Freshfully and an arcade game repair business were designed by Justin Brown of Bilt in Alabama. The space-age theme of the venue was inspired by Teasley's family members who worked on Saturn rocket assembly as well as by Birmingham-raised jazz legend Sun Ra, who claimed to have been born on Saturn and used the name for his own record label.

When it opened, Saturn and Satellite's general manager was Carl Ratliff, with Charlie Smith managing the music venue, and Steva Casey as bar manager. The hall is equipped with an array of sensors and sound-producing devices designed by Teasley with engineer Daniel Farris and The Octopus Project from Austin, Texas. The system produces continuous ambient soundscapes, making Saturn a "living venue".

On January 29, 2018 a fire broke out in the upstairs loft, leading to extensive water damage from sprinklers and fire hoses. During the 2020 Coronavirus pandemic the venue suspended public events and the loft space was listed for short-term rentals on Airbnb.