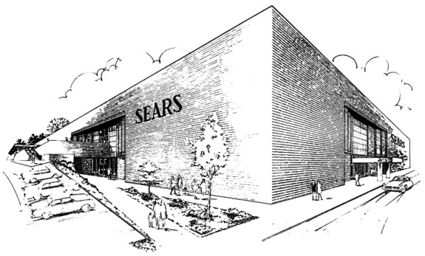 Rendering of the Sears Century Plaza

Sears Century Plaza (also called Sears-East) was a 198,000 square foot, two-level Sears department store which opened on September 25, 1975 at the west end of Century Plaza, off Crestwood Boulevard and Oporto Avenue in Eastwood. It was the largest Sears store in Alabama.

The building was designed by Crawford, Giattina & Mitchell architects and constructed by Brasfield & Gorrie.

Sears held its grand opening before the rest of the mall opened in 1975. It was the eighth Birmingham area store in the chain's expansion from downtown Birmingham into the suburbs and opened after the closure of the Sears East Lake store on 1st Avenue North. A 24-bay Sears Auto Center was also constructed outside the mall.

Century Plaza closed on May 31, 2009. Sears, which owned its section of the mall building, remained open two more weeks, closing on June 14.