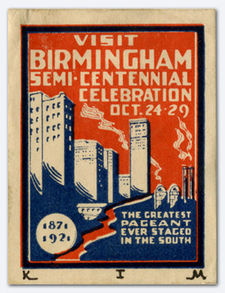 The Semicentennial of Birmingham (Birmingham's 50th Anniversary or Golden Anniversary) was celebrated during 1921.

Most of the festivities took place between October 24-29 in Capitol Park (now Linn Park). Some of the events included a floral parade complete with a queen and a beauty pageant in the park. A Fashion-Industrial Exposition was presented in a temporary Exposition Building built alongside the park.

A highlight of the celebration was a day-long visit by then-President Warren Harding on October 26. The President and First Lady were accompanied by Senator Oscar Underwood and other dignitaries for a full day of events celebrating the bustling growth of Birmingham.

An Automobile Show was held in a 650-foot-long tent and included fashion and industrial displays alongside every make and model of car, truck and tractor obtainable. Ted Brownell chaired the committee that organized the display.

A large-scale Pageant of Birmingham was staged at the newly-built Avondale Park amphitheatre, featuring costumed actors retelling the story of the city's birth. A 6,000 seat temporary grandstand was constructed to accommodate the crowds.

A Baseball double header at Rickwood Field included an early example of a throwback game as two teams competed under the "rules of the game in 1872".

The occasion inspired resident Idyl King Sorsby to design what has since been adopted as the Flag of Birmingham, and to propose that December 19, the date of the city's incorporation, be honored as "Birmingham Day".

Erskine Ramsay served on the finance committee for the Semicentennial of Birmingham. He reported once the celebration was underway that those who had contributed to the general fund would receive at least a 50% refund, as the committee had spent only $30,000 of the $60,000 it had raised from the public.

A gas-filled manned balloon sponsored by the city, The Birmingham Semi-Centennial won the 1921 International Balloon Race, launched from Brussels, Belgium.