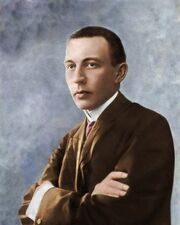 Rachmaninoff studied at the Moscow Conservatory. As a pianist, he was influenced by Anton Rubenstein and was known for his clean, open, powerful style, marked by lyricism and precision. He was also gifted with an uncanny memory for music, and could perform any piece after just one hearing. He began conducting ensembles and composing his own works as a student. He wrote his first symphony in 1896, but its premiere, under the baton of Alexander Glazunov, was panned. He accepted a position as assistant conductor of the Moscow Private Russian Opera Company. He returned to the limelight with the debut of his 2nd piano concerto in 1901 and he was finally allowed to marry his long-time fiancée, Natalia Satina, a first cousin. In 1904 he was hired as a conductor for the Bolshoi Theatre. His first tour of the United States in 1909 made him a celebrity in America.

Rachmaninoff fled Russia with his family after the political revolution of 1917. He first settled in Helsinki, Finland, but was soon lured to the United States and signed a contract with the Victor Talking Machine Company. Over the next 25 years he toured the U.S. and Europe as a performer. He became ill with melanoma in 1942 and gave his last recital at the University of Tennessee in Knoxville on February 17, 1943. He died that March at home in California and was buried at Kensico Cemetery in Valhalla, New York.