This article is about the musician. For the 1920s Auburn Tigers football player see S. R. Long. 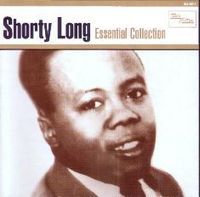 As a youngster, Long was taught about music from Birmingham luminaries like Shine Robinson and W. C. Handy. Long, who was barely 5 feet tall, taught himself to play piano and grew up singing and playing at the Birmingham Baptist Chapel. He worked around town as a DJ and played regular dates at the Old Stables nightclub. He also toured for a while with the Ink Spots.

Long moved to Detroit in 1959 and found a home on the Tri Phi/Harvey label, owned by Harvey Fuqua and his wife Gwen (who was Berry Gordy, Jr's sister). His first Motown release was 1964's "Devil With the Blue Dress", the first recording issued on Motown's Soul label, a subsidiary designed for more blues-based artists such as Long. His 1966 single "Function at the Junction" was his first popular hit, reaching #42 on the national R&B charts. Other single releases included "It's a Crying Shame" (1964), "Chantilly Lace" (1967), and "Night Fo' Last" (1968).

Long's biggest hit was "Here Comes The Judge" in 1968, which reached number-four on the R&B charts and number-eight on the Billboard Hot 100. The song was covered by Pigmeat Markham, whose version charted two weeks after Long's did in June 1968, and became a Top 20 hit. Long's 1969 singles included "I Had a Dream" and "A Whiter Shade of Pale". He released one album during his lifetime, 1968's Here Comes the Judge.

Long played many instruments, including piano, organ, drums, harmonica, and trumpet. He acted as an MC for many of the Motortown Revue shows and tours, and co-wrote several of his tunes ("Devil With the Blue Dress," "Function at the Junction," and "Here Comes the Judge."). Long was the only Motown artist besides Smokey Robinson who was allowed to produce his own recordings in the 1960s. Marvin Gaye, in David Ritz's biography Divided Soul: The Life & Times of Marvin Gaye, described Shorty Long as "this beautiful cat who had two hits, and then got ignored by Motown." Gaye claimed he "fought for guys like Shorty" while at Motown, since no one ever pushed for these artists. When Holland-Dozier-Holland came to Gaye with a tune, he stated, "Why are you going to produce me? Why don't you produce Shorty Long?"

Shorty Long died on June 29, 1969 in a boating accident on the Detroit River in Michigan. Stevie Wonder played the harmonica at his burial, and placed it on his casket afterwards. Motown issued Long's final album, The Prime of Shorty Long, shortly after his passing.