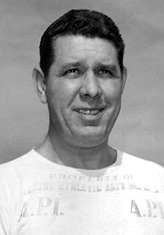 James Ralph "Shug" Jordan (September 25, 1910 - July 17, 1980) was the winningest football coach at Auburn University. The university's Jordan-Hare Stadium is named in his honor.

During World War II, he saw significant action in North Africa and Sicily before being wounded in the invasion of Normandy and receiving a Purple Heart and the Bronze Star. He continued in action in the Pacific theater after recovering.

Prior to being hired as Auburn's head football coach in 1951, he spent one season as an assistant coach of the Miami Seahawks of the All-America Football Conference, then four years as an assistant at the University of Georgia. In his first season, he coached the Tigers to a 5-5 record improving on the previous five straight losing seasons. After six years of Jordan's leadership, Auburn won its first SEC and AP national championships in 1957 with an undefeated record.

In 1971, Jordan's tutelage led quarterback Pat Sullivan to the Heisman Trophy. The next year, Jordan's Tigers upset heavily-favored, arch-rival Alabama in the Iron Bowl - a victory which became known by the nickname "Punt Bama Punt". In 1973, the university renamed Cliff Hare Stadium to Jordan-Hare Stadium in his honor making it the first stadium in the U.S. to be named for an active coach. When Jordan retired after the 1975 season he had amassed an enviable record of 176-83-6 for a .675 percentage and 22 winning seasons out of the 25 he had coached.