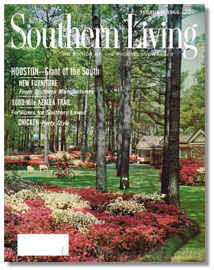 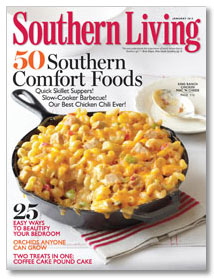 Southern Living is a widely-read lifestyle magazine aimed at readers in the Southern United States featuring recipes, house plans, and information about Southern culture and travel. With more than 2.8 million in circulation, it is the largest regional interest lifestyle publication in the United States. The magazine and its related books and media are published in Birmingham by the Southern Progress Corporation, formerly the Progressive Farmer Company, and now a division of Time, Inc. The magazine is edited by Sid Evans, who replaced Lindsay Bierman in 2014.

Southern Living debuted as a sister publication to Progressive Farmer, which had debuted in 1886. Progressive Farmer readers had already been offered a "Progressive Home" section, re-named "Southern Living" for the October 1963 issue. The section was split off into a separate magazine, modeled after the established California-based Sunset, with the February 1966 edition.

The new periodical was aimed at Southerners moving from rural areas into cities and suburbs. At a time when most media outlets portrayed the South as a backward and brutal place, the glossy magazine appeared to re-instill pride in the South's gracious hospitality, unique travel destinations, and prized cooking traditions. The editorial stance, crafted by publisher Emory Cunningham, avoided controversies and emphasized positive stories exclusively. Through direct-mail efforts targeting their own subscriber lists, the company, headed by Eugene Butler, secured more than a quarter million subscribers before going to press.

By 1977 the magazine , dubbed a "Dixiefied version of Better Homes & Gardens, was listed by Forbes as the most profitable magazine in the United States. James DeVira took over as publisher in 1983, followed by Bud Flora in 1989. By 1990 the magazine had a rate base circulation of 2,275,000 and its readers had an average household income of nearly $60,000, qualifying it for advertisers targeting an "affluent" audience without losing touch with middle-class readers interested in "do-it-yourself" projects. In addition to recipes and decorating ideas, the magazine has offered detailed home plans, with construction blueprints available for mail order.

In 2001, Southern Progress Corporation started a party-plan direct marketing company called Southern Living at Home. The products available at the parties include exclusive lines of home accessories and dishware seen in or inspired by Southern Living as well the various books and magazines produced by the company.

In April of 2010, Southern Living at Home introduced its new name: "Willow House".