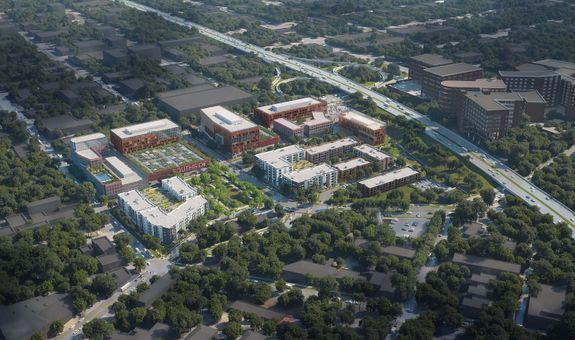 2019 rendering of the proposed redevelopment master plan, as seen from the south, by Gensler

Southtown Court redevelopment is a proposed mixed-use, mixed-income planned district to replace the 25-acre Southtown Court public housing community in Birmingham's Southside neighborhood, bounded by 23rd Street South to the west, 10th Avenue South to the south, Red Mountain Expressway to the east and University Boulevard to the north.

Redevelopment of the community, which had come to be viewed as "blight", had been proposed many times. In 2008 Mayor Larry Langford proposed partnering with the Daniel Corporation and Magic Johnson's Canyon Johnson Urban Fund in a $28 million project to redevelop the Southtown site as a mixed-use commercial district. The project's 730 residents would be relocated to newly-built condominiums or residences, move to other housing projects, or receive Section 8 vouchers for rent assistance. New homes could be built at the Trinity Steel site in Titusville, and some assisted living and mixed-income apartments could be constructed as part of the redevelopment. At a March 31, 2009 meeting Langford asked current Southtown residents to vote on their support for the idea. In April the Birmingham Housing Authority Board rejected Langford's proposal by unanimous vote.

In September 2015 HABD announced that it planned to apply in 2016 for a $30 million federal "Choice Neighborhood" grant to redevelop Southtown as a mixed-income community, similar to the Park Place and Tuxedo Terrace redevelopments.

Resident council president Irene Johnson expressed her opposition to the proposed plans, noting that HABD had not provided specific plans for how current residents would be accommodated during and after redevelopment. Attorneys Richard Rice and April Collins filed a discrimination suit on behalf of five residents alleging that the HABD's plans violate the Fair Housing Act. That suit was dismissed by Judge Abdul Kallon in February 2018 for lack of evidence of violations.

The Southside Development Co. updated HABD with a presentation of three conceptual design options in August 2018, all of which called for denser residential structures with room to incorporate office or retail space, along with one or more hotels and various open green spaces and a buffer area facing University Boulevard. The group anticipates presenting a more polished master plan in September and to seek required rezoning in early 2019. Current residents would be relocated in late summer of that year. Lundy expressed HABD's committment to secure permanent residences in the new development for all current residents who wish to return.

In May 2019 the developer showed preliminary renderings of a master plan developed by Gensler architects and planners for a mixed-use, mixed income district with 459 housing units (of which 200 would be designated as "affordable") along with 850,000 square feet of office and commercial space tailored for bioscience, medical research and medical offices. Retail spaces would include a grocery, "junior big box" and various neighborhood businesses.

HABD's Board of Commissioners entered into a formal "Master Development Agreement" with the Southside Development Company on September 23, 2019. Under the terms of the agreement, HABD will lease the land to the developer. On June 25, 2020 the Alabama Housing Finance Authority approved $10.9 million in credits for constructing 60 affordable housing units. Additional public financing for 170 affordable units for seniors are anticipated. The 2020 Coronavirus pandemic did not affect the development schedule, but did impact the market for commercial leases, potentially reducing the amount of retail space that would be constructed.