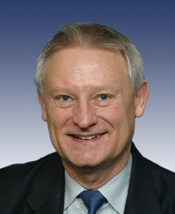 Spencer Thomas Bachus III (born December 28, 1947 in Birmingham) represented the 6th Congressional District of Alabama in the United States House of Representatives for eleven terms, from 1992 to 2015.

Bachus was born in Birmingham to Edith Wells and Spencer Thomas Bachus Jr. He graduated from Auburn University in 1969 and, while serving in the Alabama National Guard, completed his Juris Doctor in 1972 at the University of Alabama School of Law. He maintained a private law practice and also owned a sawmill before entering politics. 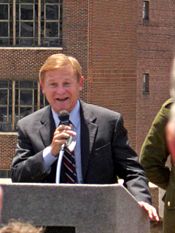 Bachus helped locate funding to restore the memorials on Birmingham's Rainbow Viaduct in 2012.

Bachus was elected to the Alabama State Senate in 1983 and served one term, after which he won a seat in the Alabama House of Representatives, representing District __ from 1984 to 1987. At the end of his second term in the House he was appointed to the Alabama Board of Education. In 1990 he ran unsuccessfully for Attorney General. From there went on to chair the Alabama Republican Party Executive Committee until 1992, when he was first elected to the United States Congress.

After the 1990 U.S. Census the 7th Congressional District of Alabama was reconfigured to create a majority African-American congressional district, as required by the Department of Justice. Much of the new district was carved out of the 6th Congressional District, leaving a strong majority of suburban whites who tended to favor Republican nominees. The realignment helped Bachus to defeat Democratic five-term incumbent Ben Erdreich by 7% of the vote in 1992. He took office on January 3, 1993.

Since that time the District has only grown more solid for the Republican Party, with President Bush winning 78% of the district's votes in the 2004 general election, more than in any other district in the United States. No Democratic challenger faced Bachus between 2000 and 2012.

Bachus' voting record was generally in line with the Republican Party's political platform. He chaired the Banking Oversight Committee, where he investigated malfeasance in the Community Development Financial Institute and participated in amending the Fair Credit Reporting Act. During the 1990s, Bachus championed debt relief for developing nations, criticizing the Bush administration for their involvement with the Sudanese government, which had been accused of acts of genocide.

Leading up to the 2004 election, Bachus was rated at 80% for economic conservatism, 77% for social conservatism, and 68% for foreign policy conservatism by the National Journal. The American Civil Liberties Union and the League of Conservation Voters both rated him at 0, while the U.S. Chamber of Commerce gave him a score of 100. The Christian Coalition gave him a 92 rating and the National Taxpayers Union gave him a 62.

On September 18, 2008, while serving as Chair of the House Financial Services Committee, Bachus and other congressional leaders were briefed privately by Ben Bernanke and Hank Paulson on the ongoing financial crisis triggered by the collapse of housing markets the previous year. Bernanke warned the members present that without strong intervention that it would be "a matter of days before there is a meltdown in the global financial system." The following day Bachus personally purchased more than $7,800 worth of shares in Proshares Ultra-Short QQQ, and then cashed out, nearly doubling his investment, when the NASDAQ dropped over the next few days.

Bachus' alleged insider trading, revealed years after the fact, was not prosecuted and did not affect his re-election. In 2013 he announced his intention not to run for a 12th term. Gary Palmer was elected to fill his vacant seat in the 2014 election. In 2017 President Donald Trump appointed Bachus to a vacancy on the Export–Import Bank of the United States.