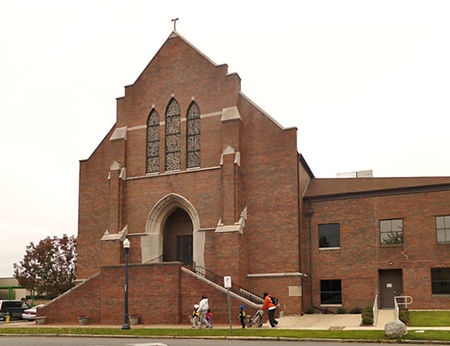 It established itself at the corner of 1st Avenue and 21st Street North. In 1888 the church moved to a new building on 6th Avenue North, between 23rd and 24th Streets. That building was destroyed in a tornado in 1899. The congregation purchased another lot on 8th Avenue North, but exchanged that property for the present lot on 15th Street by 1902, when it began meeting in a tent. The first building on the present site was completed in 1904 or 1905, but was condemned in 1920 and demolished.

Construction of the present church building began in 1925, with a rusticated brownstone foundation pierced with shallow-arched windows. Progress continued slowly, with plans evidently including a pair of corner towers and heavily buttressed walls of dark brown brick. When construction resumed in force after World War II the design of the church had changed, incorporating Gothic-style windows and red brick with limestone trim. A small office and Sunday School wing was added to the east of the main sanctuary.

The completed church building was dedicated on July 1, 1951, though the interior finishes were still incomplete.

Walter White, executive secretary of the NAACP, spoke at St Paul Methodist at the close of the Southeast region leadership training conference in February 1953. By 1956 the church began hosting mass meetings as part of the Civil Rights Movement. During the pivotal 1963 Birmingham Campaign the church hosted meetings as well as training sessions for demonstrators, including young people who participated in the Children's Crusade. It was the starting point for the Palm Sunday march led by N. H. Smith, A. D. King and John Porter on April 7, 1963.

The stained glass in the lancet windows above the entrance were installed in 1995. In 2020 the church was awarded a $500,000 Historic Preservation Fund Grant from the National Park Service to support restoration and rehabilitation of the historic building.