From Bhamwiki
(Redirected from Stafford Inn)
Jump to: navigation, search 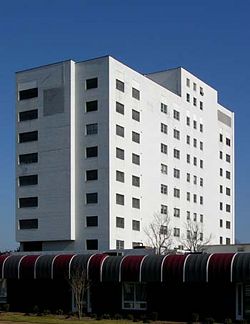 Stafford Plaza (formerly known as the Hotel Stafford and the Stafford Inn) is a nine story building located at 2209 9th Street in downtown Tuscaloosa. Completed in 1956, Stafford Plaza operated as a hotel through the late 1980s when it was converted into residential condominiums with office space on the ground level. It was designed by the architect J.N. MacCannon of Dallas, Texas, with Carl Moseley hired as resident architect in September 1953. Its final construction rose nine stories. The building features a reinforced concrete frame with an exterior originally sheathed with a pink and red brick facade. During a subsequent renovation the facade was painted white.

The following November, the Company purchased the site where the hotel was to be constructed. Located on 9th Street, the site of the Stafford School was purchased for $150,000 from the Tuscaloosa City Schools. The first renderings of the edifice were delivered in early 1954 for a 150-room hotel. With the proposed design coming in over what was budgeted, the proposal moved forward after additional capital was raised in conjunction with some financial assistance received from the city of Tuscaloosa. Later the Tuscaloosa contractors of Adams & Baker and Morgan Construction Company entered into a joint venture called Mabco to complete the hotel for $1,175,000.

Ground was broken for the hotel on October 25, 1955. Its foundation was completed the following December with the first floors rising above the street in January 1956. Topped out that April, facade construction was completed in October and the hotel celebrated its grand opening on December 15, 1956. Operated by the American Hotel Corporation, the completed hotel featured 150 guest rooms, six cabanas, covered parking and a swimming pool. The hotel flourished through the late 1960s as the premier accommodation in Tuscaloosa. However, the completion of the interstate took significant traffic away from downtown, in conjunction with new hotel/motel construction in the city, resulted in a decline at the Stafford.

With mounting financial losses, in 1978 an effort undertaken by the Tuscaloosa Hotel Company called S.O.S. - Save Our Stafford commenced. The effort centered on a campaign to raise $750,000 to update and modernize the hotel in an effort to be competitive with other hotels in the community. By December 1978, local banks stated they were ready to move forward with providing the loans for renovation. However the hotel's decline continued and on September 12, 1986, the Stafford Inn closed.

On September 15, the new ownership of the building announced plans to renovate the former hotel into 31 condominiums on the upper floors, commercial/retail space on the first floor and office condominiums in for former cabana units. Renamed Stafford Plaza, the renovation was carried out under the designs of Tuscaloosa architect James Fitts. The completed project was formally opened on August 2, 1987. The most notable tenant of the building was the Bank of Tuscaloosa who previously utilized the property as their headquarters until completion of the Bank of Tuscaloosa Plaza in 2009.