From Bhamwiki
(Redirected from State of Alabama)
Jump to: navigation, search 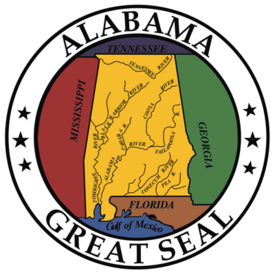 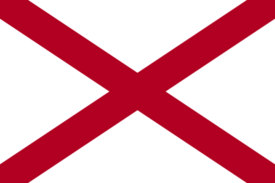 Alabama is the 30th largest state in the United States with 52,423 square miles of total area.

3.19% of that is water, making Alabama 23rd in the amount of surface water, and the second largest inland waterway system in the United States. About three-fifths of the land area is a gentle plain with a general decline towards the Mississippi River and Gulf of Mexico. The North Alabama region is mostly mountainous, with the Tennessee River cutting a large valley creating numerous creeks, streams, rivers, mountains, and lakes. The lowest point east of the Mississippi River lies in Dekalb County along a creek cutting tower ridges, and creating Buck's Pocket State Park. Another natural wonder is "Land Bridge" the longest natural bridge span east of the Mississippi River. Alabama generally ranges in elevation from sea level at Mobile Bay, to a little more than 1,800 feet in the Appalachian mountains in the northeast. The highest point is Mount Cheaha.

Other U.S. states bordering Alabama include Tennessee to the north; Georgia to the east; Florida to the south; and Mississippi to the west. Alabama has coastline at the Gulf of Mexico in the extreme southern edge of the state.

The memory of the Native American presence is particularly strong in Alabama. Among Native American people once living in present Alabama were Alibamu, Cherokee, Chickasaw, Choctaw, Creek, Koasati, and Mobile. Trade with the Northeast via the Ohio River began during the Burial Mound Period (1000 BC-A.D. 700) and continued until European contact. Meso-American influence is evident in the agrarian Mississippian culture that followed.

The French established the first European settlement in the state with at Mobile in 1702. Southern Alabama was French from 1702–1763, part of British West Florida from 1763–1780, and part of Spanish West Florida from 1780–1814. Northern and central Alabama was part of British Georgia from 1763–1783 and part of the American Mississippi territory thereafter. Its statehood was delayed by the lack of a coastline (rectified when Andrew Jackson captured Spanish Mobile in 1814). Alabama became the 22nd state in 1819.

The state of Alabama seceded from the Union on January 11, 1861 and became a Confederate state, known as the Alabama Republic on February 18, 1861. While not many battles were fought in the state, Alabama contributed about 120,000 soldiers to the Civil War. After the war a provisional government was set up in 1865, and Alabama was officially readmitted to the Union on July 14, 1868.

Alabama was the cradle of the Confederacy during the Civil War and played stage center in the Civil rights movement of the 1950s and 1960s.

Alabama is part of the Bible Belt, in which evangelicals and fundamentalists are predominant. There is a strong Catholic presence along the Gulf Coast. The major denominations are:

According to the Bureau of Economic Analysis, the 2003 total gross state product was $132 billion. The per capita income for the state was $26,505 in 2003. Alabama's agricultural outputs include poultry and eggs, [attle, plant nursery items, peanuts, cotton, grains such as corn and sorghum, vegetables, milk, soybeans, and peaches. Although known as "The Cotton State," Alabama ranks between eighth and tenth in national cotton production, according to various reports [1][2], with Texas, Georgia and Mississippi comprising the top three. Its industrial outputs include iron and steel products (including cast-iron and steel pipe); paper, lumber, and wood products; mining (mostly coal); plastic products; cars and trucks; and apparel. Also, Alabama produces aerospace and electronic products, mostly in the Huntsville area, which is home of the NASA George C. Marshall Space Flight Center and the US Army Missile Command, headquartered at Redstone Arsenal.

The city of Mobile is a busy seaport on the Gulf of Mexico with inland waterway access to the Midwest via the Tennessee-Tombigbee Waterway.

Alabama levies a 2, 4 or 5 percent personal income tax, depending upon the amount earned and filing status. The state's sales general tax rate is 4 percent. The collection rate could be substantially higher, depending upon additional city and county sales taxes. The corporate income tax rate is currently 6.5%.

Alabama has four major interstate roads that cross it: I-65 runs north-south rough through the middle of the state; I-59/I-20 travels form the central west border to the north-east corner of the state; and I-85 goes from the border of Georgia and ends in Montgomery, providing a main thoroughfare to Atlanta.

Alabama has 67 counties. Each county has its own elected legislative branch, usually called the Board of Commissioners, which usually also has executive authority in the county. Due to the restraints placed in the Alabama Constitution, all but 7 counties (Jefferson, Lee, Mobile, Madison, Montgomery, Shelby, and Tuscaloosa) in the state have little to no home rule. Instead, most counties in the state must lobby the Local Legislation Committee of the state legislature to get simple local policies such as waste disposal to land use zoning.

Alabama is an alcoholic beverage control state; the government holds a monopoly on the sale of alcohol.

The current governor of the state is Kay Ivey and the two U.S. senators are Tommy Tuberville and Richard Shelby (all three from the Republican Party). The current state constitution was adopted in 1901.

During Reconstruction following the Civil War, Alabama was occupied by federal troops of the Third Military District under General John Pope. In 1874 the "Redeemers" took control of the state government from the Republicans. After 1890 a coalition of whites passed laws to segregate and disenfranchise black residents. The state became part of the "Solid South," a one-party system in which the Democratic Party became essentially the only political party in every Southern state. For nearly 100 years, local and state elections in Alabama were decided in the Democratic Party primary, with generally no Republican challenger running.

From 1876 through 1956, Alabama supported only Democratic presidential candidates, by large margins. 1960 was a curious election; the Democrats won with John F. Kennedy on the ballot, but the Democratic electors gave most of their electoral votes as a protest to someone else. In 1964, Barry Goldwater swept the state in reaction to the Civil Rights Law of 1964. However Republican candidates rarely won state or local elections until the 1980s. In 1968, Alabama supported native son and American Independent Party candidate George Wallace, who defeated both Richard Nixon and Hubert Humphrey. The Republican Southern Strategy failed in 1976 as Jimmy Carter won the state, the region, and the nation in 1976. Today, the Republican party has become increasingly dominant in conservative Alabama politics. However, in local politics, Democrats still control many offices. Democrats have majorities in both houses of the Legislature, and registered Democrats outnumber Republicans in the state.

In 2004, George W. Bush won Alabama's nine electoral votes by a margin of 25 percentage points with 62.5% of the vote. The only 11 counties voting Democratic were Black Belt counties, where African Americans are in the majority.