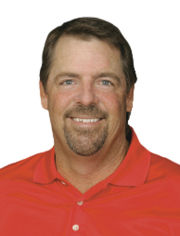 Stephen Brent Lowery (born October 12, 1960) is a professional golfer, ranked in the Top 50 of the Official World Golf Rankings.

Lowery graduated from Berry High School in Hoover and won All-Conference and All-American honors at the University of Alabama before joining the Nationwide professional tour in 1992. He won the Ben Hogan Tulsa Open in his first year as a professional. In 29 Nationwide tour events he finished in the Top 10 eight times and in the Top 25 sixteen times.

In February 1999 Lowery's home in Orlando, Florida burned to the ground. He and his wife Kathryn have three children, Kristen, Lauren and Stephen. After the fire the Lowerys moved back to Birmingham.

Lowery was inducted into the Alabama Sports Hall of Fame's Class of 2008.