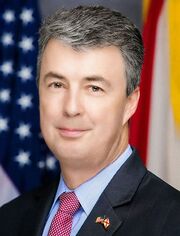 Marshall was only child of Conrad and Mary Jo Marshall of Atmore. He graduated from Pinecrest High School in Southern Pines, North Carolina, and earned a bachelor's degree in American studies from the University of North Carolina at Chapel Hill in 1987. He then earned a juris doctorate at the University of Alabama School of Law, and was admitted to the Alabama State Bar in 1990.

Marshall practiced as an associate with Maynard Cooper & Gale in Birmingham and Montgomery. In 1995 he moved to Guntersville where he and Jeffrey McLaughlin founded the firm of McLaughlin & Marshall. He served as a district representative for the American Bar Association and as a legal analyst for the Alabama House of Representatives. He also acted as city attorney for the City of Arab, and as prosecutor in Arab's and Albertville's municipal courts.

Governor Don Siegelman appointed Marshall District Attorney for Marshall County after the retirement of Ronald Thompson in 2001. He held the seat with no opposition in the three succeeding elections. While serving as district attorney, he lobbied for the Brody Act, which defined fetuses as persons for the purpose of prosecuting violent crimes, and for a law requiring a state-issued identification to purchase ephedrine and pseudoephedrine, which can be used to manufacture methamphetamine.

In February 2017 Governor Robert Bentley appointed Marshall to fill the unexpired term of Luther Strange, whom Bentley had appointed to the U.S. Senate seat vacated by Jeff Sessions when he accepted the position of Attorney General of the United States.

During his first year as Attorney General, Marshall filed a lawsuit against the City of Birmingham for violating the Alabama Memorial Preservation Act by erecting a plywood screen around the Confederate Soldiers & Sailors Memorial at Linn Park. He was also active in national politics. He joined a group of attorneys general in calling for President Donald Trump to end the "Deferred Action for Childhood Arrivals" immigration policy established by President Barack Obama.

Marshall defeated former Attorney General Troy King in a run-off in the 2018 Republican primary, and then handily defeated Joseph Siegelman in the 2018 general election to retain his office. King accused Marshall of violating state campaign finance laws by accepting campaign funds from the Republican Attorneys General Association Action Fund, a political action committee which accepts transfers from other PACs. Marshall denied that the funding violated the law.

During the general election campaign, Marshall's wife, Bridgette fatally shot herself at a relative's apartment in Murfreesboro, Tennessee. She had struggled with anxiety and depression, and had also become dependent on opioid-based painkillers prescribed to her for chronic migraines. She left a college-age daughter, Faith. At the time, Marshall served as co-chair of governor Kay Ivey's Opioid Overdose and Addiction Council. He is also an elder at LifePoint Church in Albertville, and has traveled to India for church mission work.

Marshall withdrew from the nonpartisan National Association of Attorneys General in April 2021, claiming that the organization, "seems to be going further and further left."

During the 2020 general election, held during the Coronavirus pandemic, Marshall challenged Judge Abdul Kallon's ruling which would have allowed counties in Alabama to offer curb-side voting for people with disabilities or at higher risk of death from COVID-19. The U.S. Supreme Court upheld an appeals court stay, preventing that accommodation.

In December, Marshall signed onto an amicus brief in a lawsuit filed by Texas Attorney General Ken Paxton arguing that Texas voters would be harmed unless the U.S. Supreme Court required the states of Georgia, Michigan, Pennsylvania, and Wisconsin to review whether their electors were chosen according to state law before the electoral college met. The Supreme Court found that Texas had no standing and declined to hear the case.

Following a violent insurrection at the U.S. Capitol during the certification of the 2020 electoral college vote on January 6, 2021, it was noted that the Republican Attorneys General Association's Rule of Law Defense Fund (RLDF) had funded a robocall campaign urging recipients to, "march to the Capitol building and call on Congress to stop the steal," and the association was listed as a participant on the "March to Save America" website. When criticized, RAGA claimed it had no role in planning or promoting the march, and issued a statement condemning the violence. Marshall, who headed was placed in charge of the RLDF in November 2020, issued his own statement claiming that he, "was unaware of unauthorized decisions made by RLDF staff with regard to this week's rally," and promised to conduct an internal review.

In Summer 2021 Marshall and Louisiana attorney general Jeff Landry began collecting individual's complaints of being blocked on social media platforms, a practice he characterized as censorship.