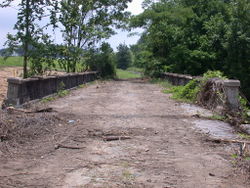 Stouts Road was a north-south toll road from Gandy's Cove, north of Cullman in Morgan County, to the Warrior River near Kimberly, from whence it joined with the Huntsville Road to Elyton and Montgomery.

The Alabama Legislature commissioned Abraham Stouts to construct a public road from Morgan County to the Black Warrior River on December 23, 1822. The legislation specified that the road originate near the home of John Gandie in southern Morgan County, and proceed by the nearest route to Baltimore or Morgan's Springs. The right of way was to be cleared 18 feet wide with the central 12-foot wide section to be grubbed free of stumps and roots. Banks and water courses were to be made so as to "ensure the easy passage of horsemen and carriages of every description," with streams and wetlands bridged by timber to the full width of the roadway.

Once construction was complete, Stouts was to report his success to the Morgan County Court, which would appoint three commissioners to inspect the work at Stouts' expense. Once the work was approved, Stouts was granted permission to erect a turnpike gate at a place of his choosing to collect tolls for a period of 12 years at the following rates: For 4-wheeled carriages, 75¢; for 2-wheeled carriages, 25¢; for mounted riders, 12½¢; for loose horses, 6¼¢; for each head of cattle, 3¢; and for every hog or sheep, 2¢. Those attempting to evade the toll would owe Stouts or his agents triple the normal amount, in addition any legal fees. If the road were to fall into disrepair during the 12-year period, the commissioners were authorized to reinspect it and to open the gates to free passage until repairs were completed and inspected.

The commission was extended to Elyton in 1827. As the region's mineral resources were developed, Stouts Road became the "Main Street" for the new mining communities of Morris, Kimberly, and Warrior, as well as the farming communities of Gardendale and Fultondale.

A few sections along the road's route are still named Stouts Road. Other sections have been renamed or obscured. The Gardendale Historical Society has identified the historic road's route through that city and asked the Gardendale City Council to approve special signs marking its location.

Sections of Stouts Road north of Birmingham were first paved in 1917-18. The "End of the Road" occurred at the intersection with Newcastle Road/Walker's Chapel Road in present-day Fultondale. A district of saloons and whisky houses, called "Bloody Beat 22" quickly rose up to serve miners from Lewisburg, Glendale and Fulton Springs. Prohibition helped pacify the district, which eventually became Fultondale's business district.

From Gandy's Cove the route runs through Vinemont and Cullman along U.S. Highway 31. A portion of it follows Main Ave in Cullman and Alabama State Route 69 to Good Hope, to around Stout Mountain, which is east of I-65 near Hanceville, and then across the Mulberry Fork at Sapp's Crossroads, a frontier settlement at a ford named Sapp's Ford in the river near I-65. From Sapp's Crossroads, the route passes by Rickwood Caverns to Brake Ferry at the Locust Fork.

Stouts Road begins at U. S. Highway 31 in Kimberly about a half mile south of the Locust Fork bridge and continues through town to the south, connecting Kimberly to Morris.

As the route enters Morris it becomes 1st Avenue through the center of town before breaking off to the west south of Francis Street and paralleling Old Highway 31 to Reno Drive just short of Turkey Creek.

According to the Gardendale Historical Society, the historic route of Stouts Road paralleled the west side of what is now Highway 31 from Horse Branch Hill to Snow Rodgers Road (where a small section called Stouts Road connects Snow Rodgers to Edwards Cemetery Road. From there it bent back southwest and followed the current North Road, which becomes Moncrief Road as it crosses Mount Olive Road. A stagecoach stop was located where Moncrief meets Pinehurst Drive.

As it entered Gardendale proper the route followed the present Main Street and split off on a loop following the currently-discontinuous King Road and Jamestown Manor Drive. There is documentation that a toll booth was located at the Price Plantation in the vicinity of the former Rogers Area Vocational Center of Gardendale High School.