The Banc Corporation was founded in the fall of 1997 by James A. "Jimmy" Taylor, who, with a group of twenty-six individual investors, acquired Warrior Savings Bank. Four other financial institutions were subsequently purchased and in March, 1998, the merged entities were renamed The Bank and the company opened its headquarters in Birmingham. The corporation completed its initial public offering of common stock to become a publicly held company in December, 1998. The Bank continued to grow in targeted areas of Alabama and Florida via the opening of new offices as well as the acquisition of community banks. The bank, however, was weighed down by years of disappointing earnings, faltering stock prices and the 2003 discovery of $26 million in improper loans. Taylor and his son, Jimmy Taylor, Jr, who served as president, resigned as CEO in January 2005 [1].

C. Stanley Bailey was installed as CEO during 2005 and the name was changed to Superior Bank in 2006. Jimmy Taylor resigned as chairman in December 2006, making room for Bailey to step into both roles.

Under Bailey, Superior quickly acquired three banks between 2006 and 2008. In 2009 Superior moved its legal headquarters to Tampa, Florida, where it had acquired First Kensington Bank. It returned headquarters operations to Birmingham in 2010.

In November, 2010, the Office of the Thrift Supervision served Superior with a cease and desist order, which directed the bank to raise capital and change lending practices. In March 2011 Bailey stepped down as Chairman and CEO. C. Marvin Scott succeeded him in those roles and Rick Gardner was named president of the bank.

Superior failed and was closed by the Office of the Thrift and the Federal Deposit Insurance Corporation on April 15, 2011, the largest American bank failure in 2011. The deposits and most of the assets were sold to a newly created bank called Superior Bank, National Association, which was a wholly-owned subsidiary of Community Bancorp LLC of Houston, Texas. CBC eventually was renamed Cadence Bancorp and Superior Bank, N.A. was merged into Cadence Bank.

In 2014 the FDIC filed a suit against Bailey, Scott, Gardner, board members James Kent, Peter Lowe, Robert Parrish, Jr, and Dewey Mitchell, and several Florida-based executives. The suit alleges "gross negligence and breach of fiduciary duty" in its process for approving loans for commercial real estate and construction between 2007 and 2010. 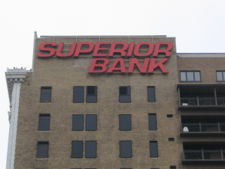 Superior Bank sign on the John A. Hand Building, April 2009

Superior also had an agreement with Presto!, the ATM network owned by Publix Supermarkets, which allowed all Superior ATM and debit cards to be used at Presto! ATM machines at no charge to its customers.