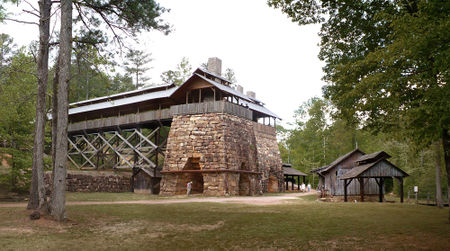 The park is located in Roupes Valley, stretching over parts of Bibb, Jefferson and Tuscaloosa counties, approximately 23 miles south-southeast of Birmingham. A 900-pound granite marker was installed at the intersection of the three counties in late August 2011. The park entrance is located at Tannehill Parkway and Eastern Valley Road, accessible from I-59 Exit 100 or I-459 Exit 1.

The furnaces themselves have been reconstructed In addition to the historic furnaces and associated sites, the park houses the 12,000 square foot Iron & Steel Museum of Alabama with interpretive displays and important artifacts. Adjacent to the museum is the 1858 May Plantation cotton gin house. In another part of the park is the historic Oglesby Cemetery. These historical and interpretive areas of the park are , which is headquartered at the park. 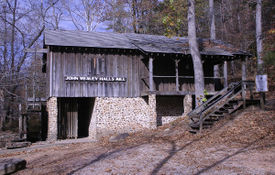 The historic John Wesley Hall Grist Mill has been reconstructed on Mill Creek in the park. A group of 1870s structures from the George Stewart farm in Bibb County were donated to the park for preservation by Mr & Mrs Carthell Kornegay. In all more than 45 historic structures are now located inside the park.

The park hosts an annual Civil War reenactment and provides space for traditional craftspeople to make and sell their work. Monthly Trade Days, annual gem & mineral and woodcarvers' shows, and special holiday events bring people to the park, as well. In addition to its interpretive sites and activities, the park provides campsites, fishing areas, picnicking grounds and horse and hiking trails for general outdoor recreation. The James Scott Young Country Store and a sweet shop are available for refreshments and a miniature railway conducts visitors around the park. The Furnace Master Restaurant restaurant is also located at the park. Camp Jack Wright, belonging to the Boy Scouts of America, is adjacent to and accessed from Tannehill. Birmingham Urban Mountain Pedalers (BUMP) is developing an extensive system of mountain biking trails at the park.

In 1976, for the American Revolution Bicentennial, the furnace was re-fired for the first time since its destruction over a century before. The park was used as a filming location for the 1983 production of "Shadow Waltz" (retitled "Rebel Love" when it was distributed in 1985). In 2010, Forever Wild purchased 560 additional acres to the east of the original park, giving visitors access to Roupes Creek's confluence with Shades Creek at the terminus of Shades Valley.

Stacey Ingrams Green was administrator of Tannehill Ironworks Historical State Park from 2013 to 2017. In 2018 she was charged with embezzling from the Bessemer Junior Service League, and in 2019 she was charged with improperly taking funds from the Alabama Historic Ironworks Foundation for personal use. She pleaded guilty to those charges and was sentenced to 5 years in community corrections and fined $5,000.