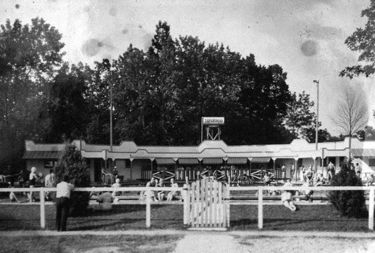 Tapawingo Plunge was a privately-owned park and swimming area located on 60 acres near Turkey Creek off Tapawingo Road (Alabama State Highway 75) in Pinson Valley. The area is watered by multiple outlets of Tapawingo Springs (also known as Penny Springs), which feed a flooded basin approximately 16.5 acres in surface area before spilling into Turkey Creek.The spring basin has been promoted as a commercial swimming hole since the late 1930s, named for "an Indian word meaning 'place of joy'."

A fire in the 1950s destroyed the park's dance hall and damaged the bath house, forcing the closure of the attraction. New owners re-incorporated the park on May 23, 1962. They renovated the swimming hole and were successful for a while, but closed again in 1974.

After the attraction closed, the area became a trailer park while the remains of the recreation area were left to deteriorate.

The spring run between Tapawingo Springs and Turkey Creek has been identified as a habitat for the endangered rush darter, vermilion darter and watercress darter. Thus the Freshwater Land Trust began purchasing parcels in the area in 2001, finally taking the opportunity to acquire and preserve the former park site (and the neighboring Conn residence) in 2012. Later that year the Land Trust removed partnered with B.A.S.S. to removed invasive plants and help establish native vegetation in the vicinity of the springs. Plans have been developed for a boardwalk and overlook for the Tapawingo Springs Preserve.