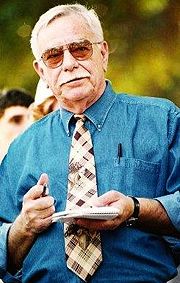 Charles Ted Bryant (born July 17, 1939 in Geneva County ; died June 23, 1999 in Birmingham) was a political reporter and columnist for the Birmingham Post-Herald.

Bryant was the son of Willie F. and Lola B. Brewer Bryant of Geneva County. He grew up on tenant farms in Geneva and Houston Counties, graduating from Houston County High School. He attended the University of Alabama and Samford University, but never took journalism classes.

Bryant's first newspaper job was with the Dothan Eagle in 1958, but he moved to the Post-Herald just a year later. He left soon after to join The Mississippi Farmer, but returned to the Post-Herald to stay in 1960. He worked as a City Hall reporter and City Desk editor before being taking the assignment as chief political reporter in 1973. His twice-weekly column "Alabama Politics" skewered Montgomery's retrogressive politics, often employing the fictionalized opinions of "Red Kneck". The series was named "Best Original Column" three times by the Alabama Press Association.

Bryant's career began just as legendary Governor George Wallace made his first run for the statehouse. He was tapped to pen a 6-part series on the life and career of Wallace after he died in 1998. He became known in the newsroom for his breadth of knowledge of political figures and his ability to weave narrative sense from the obfuscations and incomprehensible actions of Alabama political figures.

Bryant died at St Vincent's Hospital in 1999 shortly after suffering a stroke. He and his wife Fran lived in Springville and had two sons and four grandchildren. He was also survived by two brothers. Bryant is buried at Elmwood Cemetery.