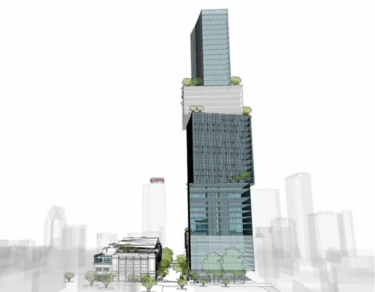 Perspective rendering of "The Block" by Circle West Architects 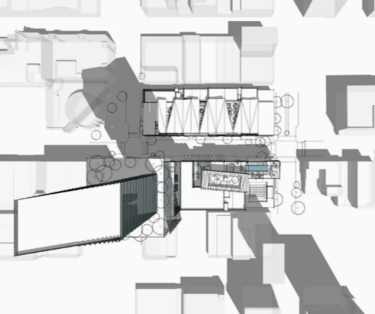 Site perspective for "The Block" by Circle West Architects

The Block is a proposed mixed-use development for the 1900 block of 2nd Avenue North, most of the south half of Block 86 and the entire north half of Block 99, in downtown Birmingham. It was proposed in August 2020 by The Ultimate Fan (TUF Inc.), a Phoenix, Arizona-based entertainment and development company founded by Theodore Holloway and Karlos Dansby.

As announced, the $250 million project was planned for development in three phases. The first phase would include the updating and renovation of 180,000 square feet of space in the row of existing buildings on the north side of 2nd Avenue. That $33 million phase was scheduled to open before the 2022 World Games.

The $35 million second phase would involve upgrades and renovations to 250,000 square feet of space in the buildings on the south side of 2nd Avenue, also slated for completion in 2022. The final phase, dubbed Dansby Tower, would be a 48-story high-rise, budgeted at $150 million, and providing 750,000 square feet of residential and hotel space. If constructed at just under 700 feet, the tower would become the tallest building in Birmingham, and eclipse the Shipt Tower as second-tallest in Alabama, behind the 745-foot RSA Battle House Tower in Mobile. Circle West Architects of Pheonix is designing the project.

TUF Inc. anticipates using office space in The Block as its corporate headquarters. Its "build and fill" development concept involves not only contracting the renovations and construction, but also managing key business tenants through its associated companies. Its "Urban Ecovillage" concept blends sustainable building practices into pedestrian-friendly lifestyle centers.

TUF Inc. is in the process of soliciting investors for the project and exploring tax incentives and credits to help finance redevelopment. The company expects to acquire most of the properties from Ladd Real Estate, which supports the concept.