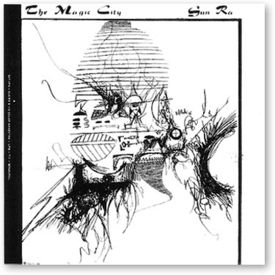 The Magic City is a free-form jazz album released in 1966 and its title track, a 27-minute long group improvisation recorded by Sun Ra and his Solar Arkestra during a rehearsal in New York in September 1965. The album, and specifically its landmark title track, represent a virtually unprecedented exploration of the possibilities of group improvisation.

Sun Ra performed on piano and clavioline (an early synthesizer) while Ronnie Boykins contributed an anchoring bass line. A barrage of saxophones played by Pat Patrick, John Gilmore, Marshall Allen, Danny Davis and Harry Spencer vie with a brass section comprised of Walter Miller and Chris Capers on trumpet and Ali Hassan, Teddy Nance and Bernard Pettaway on trombone. Allen and Davis bring other woodwind instrumentation into the work while Robert Cummings navigates the bottom range on bass clarinet. The track is spiced with percussion flourishes by Jimhmi Johnson and Roger Blank.

The recording is considered a watershed in Sun Ra's development from "space jazz" to even more avant-garde modes of improvisation utilizing groups of musicians over the course of a long free-form piece. Many critics consider the piece, which was recorded during New York rehearsal sessions in September 1965, to be "among Sun Ra's most definitive studio recordings".

The title of the album and its cover drawing by Sun Ra make reference to Birmingham, and specifically to the Magic City sign in front of the Birmingham Terminal Station, near the composer's childhood home. The album was first released on Sun Ra's Saturn Records label. It was re-released by Impulse! in 1973 (with an extended horn coda) and on CD by Evidence Records in 1993.