From Bhamwiki
(Redirected from The Moretti Code)
Jump to: navigation, search 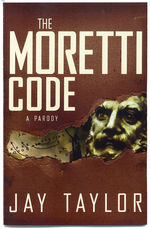 The Moretti Code: A Parody is a short parody by Jay Taylor of Dan Brown's best-selling novel The Da Vinci Code, set in Birmingham and substituting local art and college football for Brown's themes of Renaissance art and Christianity. The slim volume was published by Banner Press in 2006 in a paperback edition featuring a parodic cover designed by Jason Heaton.

In the book, art lecturer Randall Lawson is drawn into a mystery surrounding the murder of Birmingham Museum of Art curator Jake Sanderson on the grand stairway of the museum. Sanderson leaves a series of clues which also draw the attention of his estranged granddaughter Sasha Neely, a cryptologist working for the Birmingham Police Department.

The trail leads them from the museum to the Mary Cahalan statue in Linn Park, to a Compass Bank ATM, and then to the Mountain Brook condominium of Giuseppe Moretti scholar and Alabama Crimson Tide football fan Larry Turner.

Turner reveals Sanderson's participation in a society dedicated to keeping a Moretti-created trophy protected and to preserving balance between the two rivals in the annual Iron Bowl game. He also demonstrates a complex numerological interplay between the work of Daniel A. Moore and Moretti. After leading Lawson and Neely to Vulcan Park for another clue, he double-crosses them.

A stroke of luck allows the heroes to make their way to the UAB Medical Center where Moretti's sculpture of W. E. B. Davis gives them the hint they need to find a hidden cryptex at the Kirklin Clinic.

After a brief scuffle with their tormenters, Lawson and Neely visit the Patrick O'Reilly statue at St Vincent's Hospital and then arrive at Lakeview Park, site of the first Iron Bowl where Sasha's grandmother and brother are waiting to reveal themselves and welcome their relative back into the family.

Meanwhile, Lawson finally puzzles out the location of the hidden trophy and pays a visit to its resting place.