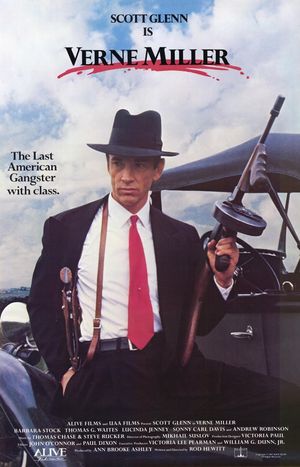 The Verne Miller Story (debuted as simply Verne Miller, later distributed as Gangland) is a 1987 feature film produced by Alive Films. It was written and directed by Rod Hewitt, and starred Scott Glenn as a hit-man for Al Capone's Chicago mob. The sensationalized story was inspired by actual persons and events. Some scenes for the feature were filmed in the Birmingham area, and the completed film had its world premiere at the Alabama Theatre on July 30, 1988.

The producers convinced organizers of a Halloween Bash at University Inn on October 31, 1986 to advertise a 1930s theme for their costume contest as a means of casting extras.

Filming locations in Alabama included the Alabama Theatre, the Tutwiler Hotel, downtown Springville, the Woodward House on Red Mountain, Romeo's on 7th Avenue South, the Bessemer Hall of History, and the pedestrian tunnel under Independence Drive between Shades Cahaba Elementary School and Piggly-Wiggly's parking lot. Period automobiles in the film were lent by the Moore Auto Classic Museum.

The film was screened at the Montréal World Film Festival on August 30, 1987. It's "world premiere" followed at the Alabama almost a year later. It was originally released on videocassette under the Verne Miller title, but was later distributed on videocassette by Nelson Entertainment as Gangland.