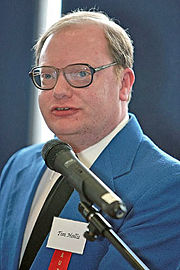 Timothy Lynn Hollis (born March 12, 1963 in Birmingham) is a historian of popular culture, and the author of 21 books on widely-varying topics.

Hollis was born at Carraway Methodist Hospital to Mr and Mrs Lynn Hollis of Dora. He attended Bagley Junior High where his father was a teacher. He graduated from Corner High School in 1980. He graduated with a mass communications degree from UAB in 1984. He currently resides in Dora in a home overfilled with books, artifacts and ephemera.

Hollis worked as an editor for several years before completing his first book, a biography of television personality "Cousin Cliff" Holman, in 1991. His next book, published by the University of Mississippi Press, was a pioneering historical look at Southern tourism entitled Dixie Before Disney: 100 Years of Roadside Fun. The book became one of that press' most successful releases and opened the door to several follow-up volumes presenting different facets of Hollis' wide-ranging nostalgic interests.

In addition to writing and collecting, Hollis gives presentations to elementary school groups on creative writing. He is also a contributor to Birmingham Rewound and was a guest at the Alabama Bound author's events at the Birmingham Public Library in 2000, 2002, 2005 and 2007.

In 2015 Hollis wrote and produced a television series, "The 30-Minute Tim Hollis Hour," based on characters he created in the 1970s for stories and comics, and revived in the 1990s for a creative writing program. Four episodes aired on the Alabama Cable Network's public access channel. In 2020 the project was resumed as a web series entitled, "The Weird World of Tim Hollis," which also includes a public domain cartoon short and a feature where Hollis shows off artifacts from his museum.