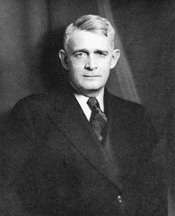 Stewart attended the Pryor Institute in Jasper, Tennessee and Emory College in Atlanta before obtaining his law degree from Cumberland University in Lebanon, Tennessee. He was admitted to the Alabama bar in 1913 and practiced in Birmingham for two years before moving back to Jasper, Tennessee.

In 1919 he became a district attorney for Tennessee 18th circuit, which he served as chief prosecutor in the "Scopes Monkey Trial" (Scopes v. State of Tennessee, 1925) in which football coach and substitute teacher John T. Scopes was prosecuted for violating the state's "Butler Act" which forbid the teaching of evolution in public schools. Scopes had agreed in advance to stand trial to help put the town of Dayton, Tennessee on the map and to give the American Civil Liberties Union an opportunity to challenge the act. Stewart's argument for the prosecution was that the public school curriculum was for the state legislature, not the courts, to determine. This argument carried the day as Scopes was convicted. His conviction was overturned over a technicality by the Tennesseee Supreme Court, but the constitutional challenge was unsuccessful.

In 1939 Stewart joined the United States Senate, having been elected to replace labor leader George L. Berry whom Governor Gordon Browning had appointed to the vacancy caused by the death of Nathan L. Bachman. He could have begun his Senate service in November 1938, but instead completed his term as district attorney before going to Washington. Stewart was reelected in 1942, but lost the 1948 primary to progressive challenger Estes Kefauver, and resumed his law practice.

Stewart died in 1972 and is buried at Memorial Park Cemetery in Winchester, Tennessee.