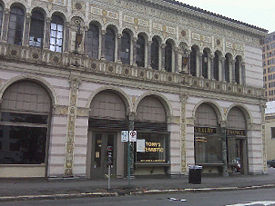 Tony's Terrific Hot Dogs and Sandwiches was a hot dog stand located in the Florentine Building at 2103 2nd Avenue North.

Tony's was opened in 1980 by Tony Ippolito, who owned a Sneaky Pete's franchise nearby and was formerly a Homewood firefighter. At age 69, Ippolito decided to close the restaurant on February 21, 2009.