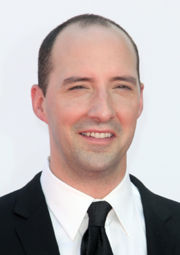 Anthony Hale (born September 30, 1970 in West Point, New York) is an actor, best known for his sitcom roles as "Buster" in FOX's "Arrested Development" and as Gary Walsh in HBO's "Veep", for which he won an Emmy for "Outstanding Supporting Actor in a Comedy Series".

Hale's father, Mike, taught nuclear and atomic physics at the U.S. Military Academy and his mother was an assistant to New York State Representative Kathy Ashe. The family moved to Tallahassee, Florida when he was a boy and he participated with the Young Actors Theatre there. He went on to earn a bachelor's degree in journalism at Samford University in 1992 and also attended Regent University in Virginia.

After graduating, Hale moved to New York City and studied acting at The Barrow Group. He also co-founded "The Haven", a group of artistically-minded Christians. He landed guest appearances on "Dawson's Creek", "The Sopranos" and "Sex in the City", and made a memorable appearance in a Volkswagen commercial dancing to "Mr Roboto". In 2003 he was cast as "Buster Bluth" in "Arrested Development", and remained in the recurring role through 2006, with an encore appearance in the show's Netflix re-launch in 2013.

After "Arrested Development" wrapped in 2006, Hale co-starred in the NBC sitcoms "Andy Barker P.I." and "Chuck" and had a recurring role on the CBS drama "Numb3rs". He also landed a few minor film roles and voiced "Furlough" in the 2008 film The Tale of Despereaux.

Beginning in 2012, Hale co-starred with Julia Louis-Dreyfus on the HBO comedy series "Veep". He won a Primetime Emmy for the role following the show's second season in 2013.

Hale married make-up artist Martel Thompson on May 24, 2003. They reside in Los Angeles, California and have one daughter.